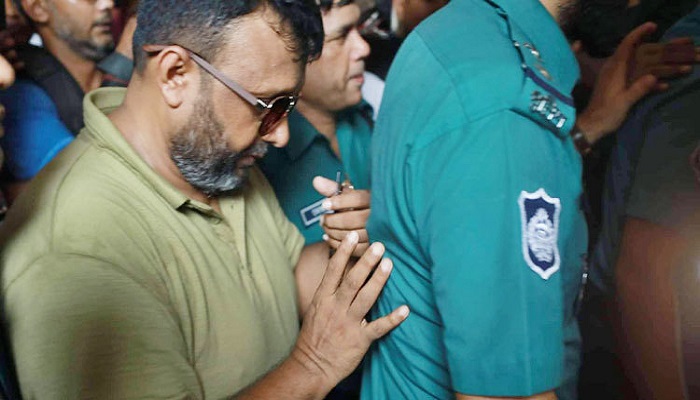 A Tribunal in Dhaka  has rejected the bail petition of former Sonagazi OC Moazzem Hossain, who was arrested for illegally recording a rape victim yesterday by Shahbagh Thana police, and sent him to jail in a case filed under Digital Security Act.

Earlier, he was taken to Dhaka Metropolitan Magistrate (CMM) court on Monday morning.

A team of Sonagazi police reached in Dhaka to take custody of arrested Moazzem from Shahbagh police and took him back.

Moazzem, who was earlier transferred from the police station for mishandling the Nusrat case, was sued under the Digital Security Act.

Moazzem’s arrest was made 20 days after the arrest warrant issued against him by the tribunal in a case filed over murder of Feni madrasa student Nusrat Jahan Rafi following sexual harassment by the madrasa principal.

On May 31, the letter of arrest warrant reached the office of Feni police super, but initially the SP denied to have received it. On June 3, he admitted that he had received it.

On June 5, the arrest warrant reached the office of Rangpur Range police.

On April 6, Nusrat, an Alim examinee of Sonagazi Islamia Fazil Madrasa, was set on fire on the rooftop of the madrasa for her refusal to withdraw the case filed against the madrasa principal, Siraj-ud-Daula, who sexually harassed her at his office room on March 27.

She succumbed to her injuries during treatment at Dhaka Medical College and Hospital on April 10.

When Nusrat went to file the case against the madrasa principal, Sonagazi OC Moazzem Hossain recorded her statement on camera without her consent and circulated the clip on social media on April 15.

The OC also tried to turn the murder into an incident of suicide. On May 8, he was temporarily suspended.

On May 27, the Police Bureau of Investigation (PBI), the investigating authority of the murder case, submitted the charge sheet before the court.