One woman's mission to protect the hammerhead 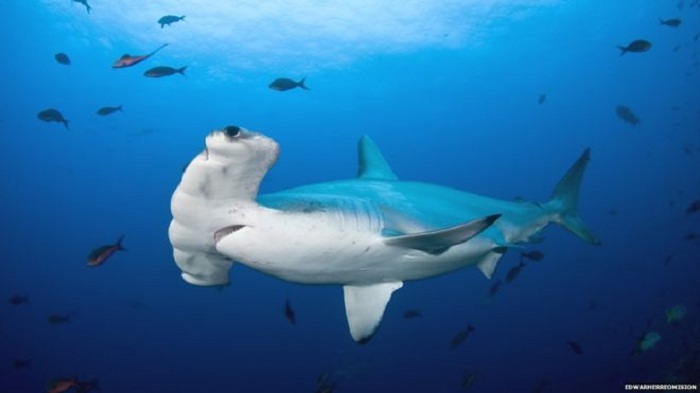 Swimming off Cocos Island in the Pacific Ocean, Ilena Zanella had her first close encounter with hammerhead sharks.

As social creatures, the sharks gather in their hundreds, and soon she found herself surrounded.

Easily spooked by the bubbles coming from her diving equipment, the sharks appeared shy, vulnerable and beautiful.

"I saw the vulnerability of this endangered species," she says.

"This experience changed my life and I decided to dedicate my work and myself to the protection of hammerheads."

Hammerhead sharks are something of a curiosity in the animal kingdom, with their elongated heads and pinprick eyes.

Of the nine known species, several are endangered, including the scalloped hammerhead, which is found off the Pacific coast of Costa Rica.

Despite threats from overfishing and the shark fin trade, in many areas of the ocean there are no fishing restrictions for hammerheads. The scalloped hammerhead is in decline, according to the International Union for Conservation of Nature - IUCN.

Ilena Zanella is co-founder of the non-profit organisation, Misión Tiburón, which is campaigning for better protection for the shark.

In Costa Rica, ceviche, the national dish, is commonly made from hammerheads. And Zanella was shocked and saddened to see juveniles being used as fishing bait.

"It's an endangered species used as bait," she says. "Actions like that are destroying our oceans and we need to act, we need to do something."

Illena Zanella recently won a Whitley Award for her conservation work. She says she will use the award to get better protection for the hammerhead shark.

Based on research by her team, the tropical fjord of Golfo Dulce in Costa Rica was declared a shark sanctuary last year; including a large no take zone. The inlet is a crucial nursery ground for the hammerhead.

Misión Tiburón is working with the local community to reduce the use of juveniles as fishing bait and to dispel myths around sharks. The hammerhead is only rarely a threat to humans, and, like all sharks, has an important role in the health of the ocean ecosystem.

More than a decade on from her life-changing swim with hammerheads, Zanella now has a young daughter. She says when her daughter is 16 she will take her to the island of Cocos to swim with sharks just like she did.

By then, she hopes to have persuaded the world to put better protection in place for the curious shark.