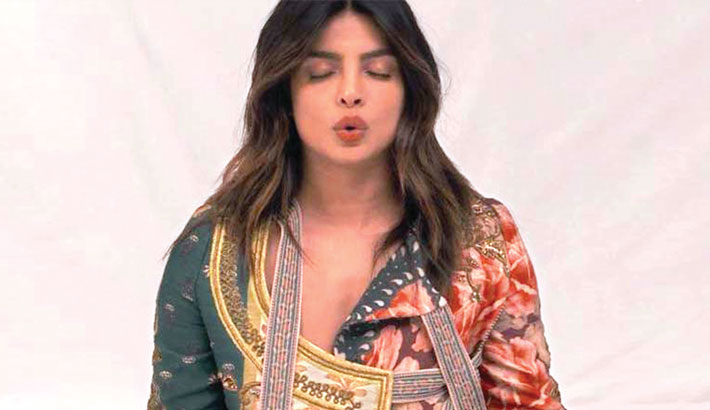 In a hilarious video, Bollywood diva Priyanka Chopra Jonas shared five life lessons - combining fashion with the philosophy of life, and it will leave you in splits. The video showed the actor donning different outfits and linking lessons with each of them.

Sharing the video on her Instagram account, Priyanka wrote, "5 life lessons with yours truly (I'm so funny) haha."

The video begins with Priyanka welcoming her fans. Sharing the first tip while twirling her skirt she said, "Always be bigger than your skirt." Later, the actress was seen flaunting her back and moving her waist in a glittery saree, sharing the second tip of her life, "Have nothing to hide."

Cladded in another saree paired with a bralette, the actor revealed the tip number three, "Sari, not sorry." The actor shared the fourth tip, "make some noise" while flaunting 'ghunhroo' tied on her ankle. Last but not least comes the most important tip. "When you have a difference, patch it up! So funny, I'm so funny!"

The actor said while showing her denim that has various patches on it.

On the work front, Priyanka is all set to make her Bollywood comeback with Shonali Bose's The Sky Is Pink. Apart from that, she has also collaborated with American actor Mindy Kaling for a wedding comedy.

Priyanka Chopra also recently visited Ethiopia to spend time with refugee children. The actress took to Instagram to share a series of photographs and videos of herself with the children from her philanthropic tour as Unicef's Goodwill Ambassador in Addis Ababa.

She also met Sahle-Work Zewde, the first female president of the country.