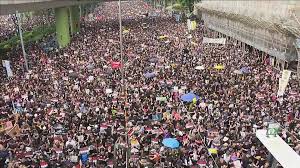 The number has not been independently verified. If confirmed, it would be the largest protest there since 1989.

The masses turned out despite the suspension of the bill - which would allow extradition from Hong Kong to mainland China - on Saturday.

Many protesters, who fear increased Chinese influence over Hong Kong, are calling on her to resign over the unrest.

They are also demanding that the bill be scrapped, not just suspended.

What happened at the protest?

The protest was mainly peaceful, with police officers reportedly holding back to allow the throngs of people to slowly pass through the city. This contrasted to scenes at the last previous major demonstration on Wednesday, which saw clashes between protesters and police that injured dozens.

The demonstration began early in the afternoon in Victoria Square, with many wearing black.

Many held white flowers to mourn a protester who fell to his death on Saturday from a ledge, where hours earlier he had unfurled an anti-extradition banner.

The progress of the march was slow, as the large numbers of people blocked many streets and crowded train stations.