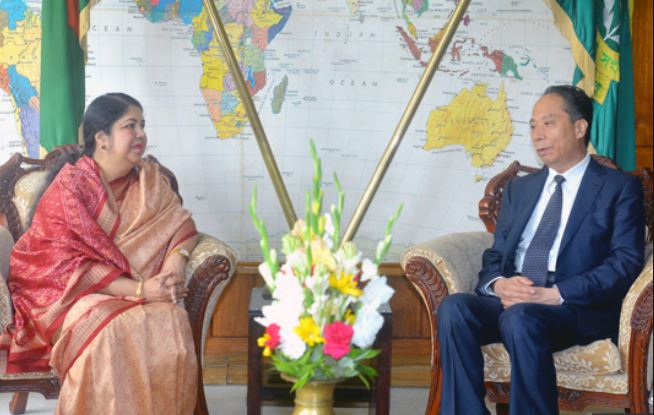 Jatiya Sangsad Speaker Dr Shirin Sharmin Chaudhury on Sunday said the government is reaching the development services at the grassroots.

The speaker made the remarks when a 16-member Chinese delegation, led by Ji Bingxuan, vice-chairman of the 13th National People’s Congress of China (NPC) Standing Committee and President of the Chinese Association for International Understanding, met her at the letter’s office, a press release said.

Highlighting the country’s progress in various sectors, she said Bangladesh is advancing fast in economic development as it achieved 7 percent GDP growth in the last few years and now GDP growth is 8 percent.

Noting that China is one of the largest development partners of Bangladesh, Dr Chaudhury urged Chinese entrepreneurs to invest in the country’s 100 specialised economic zones, and its power, communication and ICT sectors.

She said since a big portion of the country’s population is youths, Chinese investment would play a key role in ensuring employment of the youths in Bangladesh.

The speaker said Bangladesh is moving fast towards becoming a developing country under the dynamic leadership of Prime Minister Sheikh Hasina.

She said Bangladesh will be a middle-income country by 2021, a developing one by 2024 and a developed country by 2041 as dreamt by Father of the Nation Bangabandhu Sheikh Mujibur Rahman.

During the meeting, they discussed strengthening bilateral relations between Bangladesh and China, infrastructural and socioeconomic development of Bangladesh, bilateral trade, establishment of silk road and formation of a parliamentary friendly group.

Chinese Ambassador in Dhaka Zhang Zao was, among others, present.