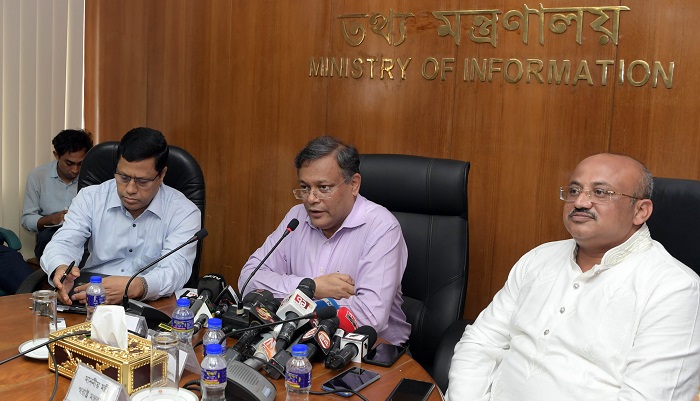 Information Minister Dr Hasan Mahmud on Sunday said BNP and Centre for Policy Dialogue (CPD) are criticising the national budget in an identical manner every year.

“They (BNP and CPD) make mainly three types of criticisms – the budget is highly ambitious, the budget is not acceptable and it won’t bring any welfare to the common people,” he said in a press conference at his Secretariat office in the capital.

Hasan, also the publicity and publication secretary of the ruling Awami League (AL), said BNP and CPD didn’t see any development whereas the World Bank is saying that Bangladesh and its economy are going ahead. “Is CPD a bigger research organization than World Bank?” he asked.

“They (CPD) do research only for making criticisms,” he said.

“So, the decision for increasing the number of taxpayers to around one crore is a breakthrough. The budget is industry-business-friendly,” Hasan said, adding the rate of previous budget implementation is 93 to 95 percent and the implementation rate of development budget is 90 percent.

“How could we get the achievement if the budget was not implemented?” he asked.

The minister said there was 40 lakh tons food deficiency when the AL government assumed office. But now Bangladesh is a food-surplus country, he added.

About the behavior of Nagarik Okkya convener Mahmudur Rahman Manna, Hasan said a politician has to have politeness, civilization and etiquette while making any criticism of others. “I cannot imagine how he made criticisms in such words though he did student politics in the past,” the minister added.

He urged Dr Kamal Hossain to maintain unity among themselves as many parties and leaders have already declared to leave the Jatiya Oikyafront.

Urging BNP leaders to maintain politeness while giving speeches, Hasan said, “We want criticisms as every person has the right to criticise the government activities. But that should not be blind criticism.”