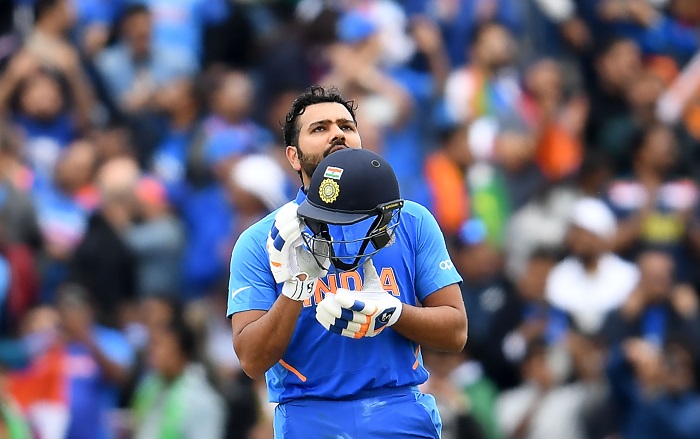 India were 305-4 at the end of 46.4 overs against Pakistan when rain interrupted their crucial World Cup 2019 fixture at Old Trafford in Manchester.

If India do not get to complete their innings, the target for Pakistan would be 327 in 46 overs, according to ESPNcricinfo. And in case the second innings is reduced to just 20 overs, the target would be 184.

Lokesh Rahul, promoted in the absence of the injured Shikhar Dhawan, and Rohit Sharma started the Indian innings, whereas the pairing of Mohammad Amir and Hasan Ali shared the new ball for Pakistan.

Amir, as he has done multiple times in the World Cup so far, started with an excellent opening over — a maiden. The second one bowled by Ali was expensive, however, with eight coming off it, including a boundary off an inside edge.

Indian openers started cautiously, not taking any risk against Amir, who had his tail up. The southpaw pacer was bang on target but he was way off with his follow through, receiving two warnings from the umpire for walking on to the danger area of the pitch.

With chances already at a premium, Pakistan missed a gilt-edged opportunity to run out Sharma in the 10th over, with Fakhar Zaman throwing the ball at the non-striker's end when he should have targeted the batting end.

After the first 10 overs, India were 53-0 and slowly upping the run rate. In the next dozen overs Sarfaraz tried almost every bowling option he had at his disposal but the elusive breakthrough did not come.

The first wicket finally fell in the 24th over when Wahab Riaz had Rahul caught. The setback did little to affect the direction of the Indian innings thanks to captain Virat Kohli arrival. By the 35th over India were 206-1 and set for a late push thanks to the many wickets in hand.

Sharma's 140-run knock and his 98-run partnership came to an end in the 39th over when Ali had him caught. Amir, who was excellent but wicketless in the opening spell, was brought back for the final 10 overs.

He was dispatched for two boundaries in the 44th over but immediately responded, first taking the wicket of Hardik Pandya (26 off 19) and then MS Dhoni in the 46th over. The flurry of wickets pegged India back some but the dangerman Kohli was still in the middle and looking menacing at 71 when rain interrupted play.