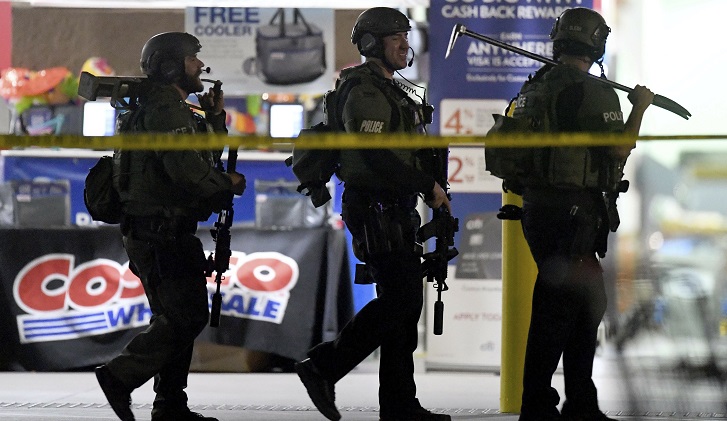 Shoppers and employees have described terror and chaos as shots rang out inside a busy California warehouse store as a gunman in an argument near the freezer section opened fire - killing one man, wounding two and sparking a stampede.

Terrified shoppers ran outside the store and tried to hide during the shootout Friday night in the city of Corona east of Los Angeles as families stocked up for the weekend.

The suspect was not identified but told officers at the scene after he was taken into custody that he had been injured, though no details were immediately available Saturday on how he was hurt.

Police swarmed the store after the gunshots rang out and witnesses told KCAL-TV that a man with a Mohawk haircut argued with someone near a freezer section when he pulled a gun and fired at least six times.

The man involved in the argument was killed and two other people were wounded, Corona police Lt. Jeff Edwards said. In statement issued early Saturday, Corona police said the conditions of those injured were unknown. The injured gunman was taken to a hospital, Edwards said.

No identities were immediately released. Police said the name of the deceased won't be released until the Riverside County coroner notifies family.

Shrieks from inside the store were heard on video shot by shopper Nikki Tate, who had stopped by the store with her daughter to pick up steaks for Father's Day.

"Walked back to the meat section and just immediately heard about six or seven shots and got on the ground," she told KNBC in Los Angeles . "Didn't know if this was another mass shooting."

In the video, her daughter says, "Mommy, we need to go." The two huddled together.

Christina Colis told the Riverside Press-Enterprise that she was in the produce area when she heard six to seven shots and hid with other shoppers in a refrigerated produce room. She said her mother saw people injured on the floor.

"I thought maybe someone dropped a bottle of wine, but then I kept hearing shots," shopper Will Lungo told the Press-Enterprise newspaper. "An employee came in and helped us out through the emergency exit."

Witnesses told KCAL-TV that shoppers and employees rushed to the exits. The station reported that more than 100 people were outside the store at one point. Left behind inside the store were purses, cellphones and backpacks from panicked shoppers, Corona police said.