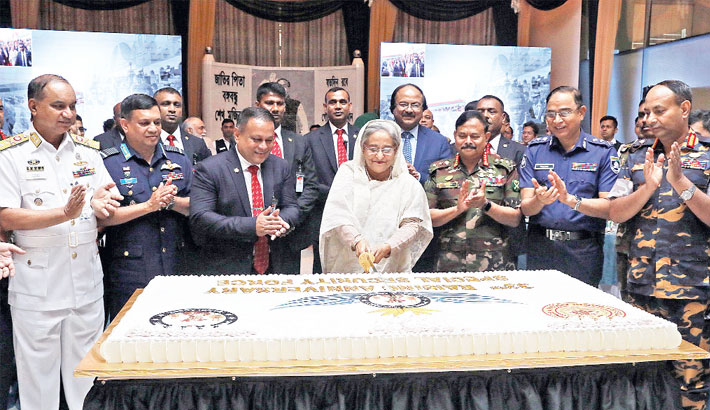 Prime Minister Sheikh Hasina on Saturday asked the Special Security Force (SSF) personnel to be equipped with knowledge and training over new technologies to thwart the constantly-changing pattern of crimes, reports UNB.

“They (SSF members) will have to be equipped with knowledge over modern technologies. They must be aware about the new technologies being invented every day.

They also need to have awareness about the crime [trend] being changed constantly, and about training [to deal with that],” she said.

The Prime Minister said this while addressing a function marking the 33rd founding anniversary of SSF at the SSF Officers’ Mess in the city’s Tejgaon area.

“The new technologies are improving the lifestyle of people and accelerating the development pace. On the other hand, various types of risk are emerging with the invention of new technologies. The patterns of terror activities are also changing constantly,“ she said.

Sheikh Hasina said new technologies create new scopes for the criminals who want to be involved in terror and militant acts as well as other social offences.

“We must have the expertise to face these [new crimes]. We’ll have to remain updated,” she said pointing at the SSF and law enforcement agencies.

The Prime Minister said her government is conscious about the misuse of technologies so that it can take proper action against those who will use those for evil purposes.

She said the government always collects necessary and modern equipment for the SSF to deal with security risks.

Noting that now it is the age of media, Hasina said crimes spread fast soon after the media publish reports on any new crimes. “So, the government should remain alert about crimes.”

Hasina praised the SSF personnel for performing their duty with utmost competence and professionalism in ensuring security to VVIPs as well as foreign ones who visit Bangladesh.

“I want this force (SSF) to be built as an ideal security force. Its development will continue to brighten the image of the country and the nation,” she said.

The Prime Minister said maintaining a peaceful environment is badly needed for the development of a country. “We want to develop our country. One thing we need to keep in mind that it’s not possible to develop the country without a peaceful situation.”

She said her government has relentlessly been working for the development of the country facing many odds and obstacles.

On behalf of the SSF personnel, their director general handed over an artwork and a photo book to the Prime Minister.