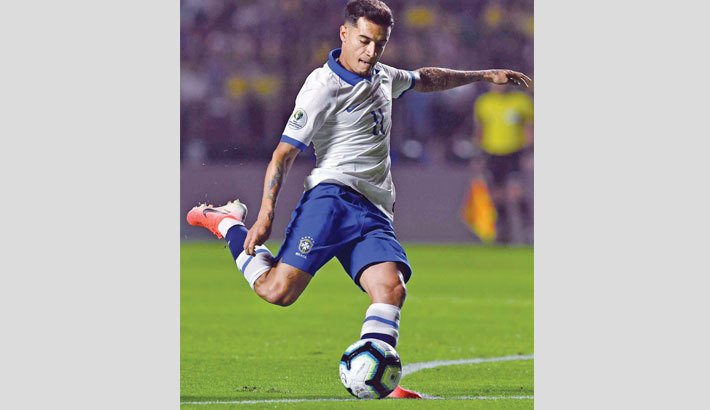 Philippe Coutinho scored a second-half double and Everton added a cracking third as Brazil recovered from a sleepy start to beat Bolivia 3-0 in their Copa America opener on Friday, reports ESPN.in.

Both sides were poor in the first period but the game briefly came alive five minutes into the second half when Coutinho slotted home a VAR-assisted penalty.

Coutinho grabbed a second with a close-range header three minutes later before Everton rifled home a third from outside the box with five minutes remaining.

Wearing white shirts for the first time in more than 60 years, the home side huffed and puffed but rarely threatened and even after they went 2-0 up, they looked devoid of ideas and urgency.

Brazil, who started with Roberto Firmino up front and Fernandinho in midfield in place of the injured Arthur, failed to inspire the strangely subdued crowd of just 46,342 at Sao Paulo’s Morumbi stadium.

“Pretty tough game. We were a little nervous because it is the first game,” Coutinho said. “But when we scored the first one, we started to play properly.”

Richarlison said it was understandable for the fans to be frustrated.

“It’s normal. The fans want to see goals but we kept our cool,” Richarlison said. “The first half had a little bit of nervousness, but in the second we could made good passes and scored the goals easily.”