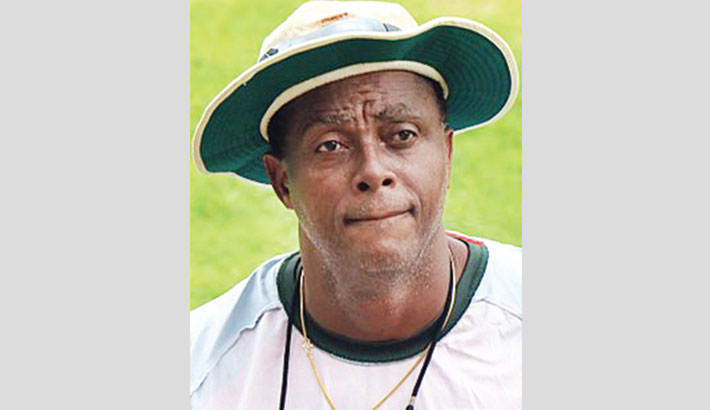 Bangladesh pace bowling coach Courtney Walsh said that they are formulating plans to take on explosive West Indian duo of Chris Gayle and Andre Russel but insisted that Tigers are well aware that they won’t be competing against a two-man army.

Bangladesh will take on West Indies on June 17 at Taunton and though they have had a considerable amount of success against them during the last one year, the present West Indian set-up is certainly more balanced strength wise.

The inclusion of Gayle, Russel and Nicholas Pooran apart from few others, who were not part of the squad that was beaten by Bangladesh on three successive occasions in the Tri-nation Series, clinching their maiden multi-nation tournament, certainly makes them a stronger opposition then the past.

“They are two dangerous players we have to try to restrict, and get them out at the same time to have more control of the game,” Walsh told reporters during the practice session at Taunton when his attention was drawn about the inclusion of the two explosive batsmen.

“We will be focused rather on their team, because they have very good players in their team as well. I am sure we can perform as a team against West Indies,” he said adding that they are not taking anything for granted against West Indies despite their dominance over Windies in the Tri-nation in Ireland.

“It is a different tournament and we have to do it all over again. We will be looking in the context of the game itself. We will have to face players who didn’t come to Bangladesh or play against us in the West Indies,” added Walsh.

According to Walsh, though West Indies began their ICC World Cup 2019 campaign brightly by beating Pakistan in a convincing manner and looked promising against Australia despite losing it eventually, he is confident that if Tigers can bowl in the right areas consistently there is always hope to conquer their opponents.

“We were very consistent in every department right throughout that Tri-nation,” Walsh said.

“We have been hampered a little bit by the weather here. It is out of our control. If we can get the consistency in the next couple of games, who knows what will happen!’’ said Walsh.

“You need to have pace sometimes, but for me, consistency, control and execution is more important. If you don’t have the 140-150 kmph, then you have to compensate (for) that. We have certainly been consistent, hitting the right areas and getting good variation,” he said.

“The guys have been working hard but you will have bad games here and there, but for us consistency is the key,” he said.

Walsh added that pace bowler Rubel Hossain is not getting picked in the ongoing ICC World Cup 2019 due to team combination.

Calls for including experienced Rubel in the playing eleven had been going around for quite some time now as according to many Rubel have got the extra-pace that can give them an edge considering their pace unit did not perform well after the opening game against South Africa as a unit and as a result Bangladesh lost the following two games against New Zealand and England respectively.

There was widespread speculation that Tigers opted to change their team formation- three pace bowlers and two spinners- just to accommodate Rubel in the playing eleven for the game between Bangladesh and Sri Lanka that was abandoned due to rain.

“This question is for the selectors (why he is not selected),” said Walsh.

“He had a very good season last year. He is bowling pretty well this year too, but because of the formation of the team, he hasn’t been able to get in. I just hope he takes his chance well with still a couple of more games left in the tournament,” he said.

“He has been bowling well in the nets so it is a good sign for Bangladesh cricket. Hopefully whenever he gets his chance, he will make it count,” he added.