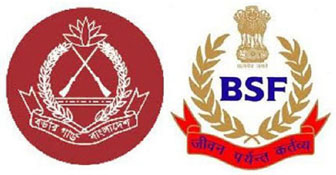 A battalion commander level flag meeting between Border Guard Bangladesh (BGB) and Border Security Force (BSF) of India today(Saturday) reached a consensus on peaceful coexistence along border through stopping all sorts of crimes.

The border forces of the two countries discussed and devised ways and means on how to stop drugs trafficking, border killings and illegal cross border intrusions.

The two-hour meeting was held in Atroshia BSF camp area opposite to Bakchar BGB Border Outpost in Chapainawabgonj district.

Other officials concerned of both sides were also present at the meeting.

During the meeting, both sides agreed to solve the existing border problems between the two countries. They also stressed the need for checking smuggling, women-children trafficking and illegal trespassing from both the countries.

Lt Col Sazzad Sarwar told journalists that the meeting was held in a congenial atmosphere. The meeting put emphasis on stopping killing of Bangladeshi nationals on the frontiers, stoppage of physical torture on Bangladeshis by BSF, checking of smuggling and drug trafficking and illegal trespassing.