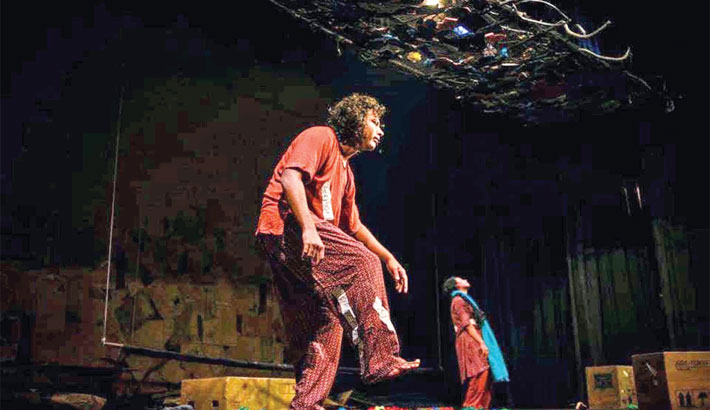 Written and directed by Azad Abul Kalam, Tragedy Palashbari is the 30th production of the troupe.

Tragedy Palashbari revolves around the devastating tragedy of the Spectrum Sweater and Knitting Factory at Polashbari, Savar.

In the midnight of April 11, 2005, the nine-storey building of the factory collapsed into a heap of rubble in an instance.   At that time, over a hundred workers were working inside the factory.

About 64 workers died instantly in that occurrence.

From the report of the investigation committee, it was revealed that the building was constructed three years back on a swampy low-lying land, without taking necessary precautions for risk factors.

Tragedy of Polashbari has been written based on that event, where Taravan has been portrayed as one of the workers of the factory who died in that event.

She is a reflection of the workers who came to work during the night shift on that frightful night.

The play has been weaved with the thread of her nostalgic remembrance of a cycle of her memories, dreams and life. The ceiling may fall down at any moment and smash her life without letting her chance to move.

In the situation, she somehow identifies herself with the equation of what she has got in life and what she has not. She represents hundreds of Taravans who also feel the same; some of them die in the same manner.