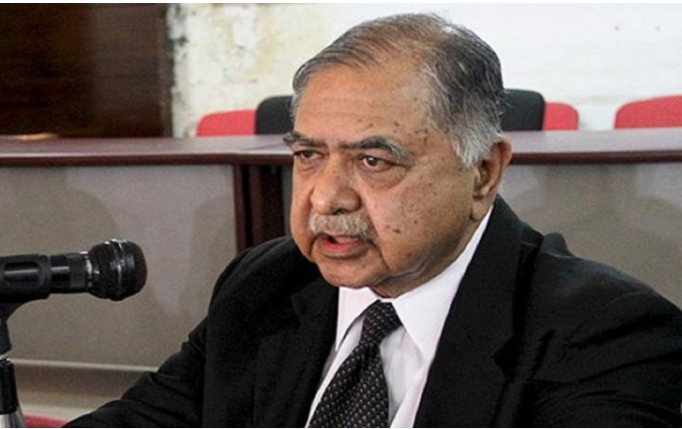 Gano Forum on Saturday turned down the national budget for 2019-20 saying it has been formulated to protect the interest of a handful of businesspeople and politicians ignoring people.

“This is not a budget for people. We reject this budget…,” said  Gano Forum president Dr Kamal Hossain.

He came up with the remarks while giving his party’s formal reaction to the proposed budget at a press conference at the Jatiya Press Club.

Dr Kamal said they came up with the reaction to the budget to inform people about how much their interest is protected and ignored so that they can play their due role as the owners of the country.

“We want people to get organised and be vocal about it, and we’ll do whatever necessary for bringing a change in the government through a democratic process,” he said.

“It’s a budget favouring the interest of a handful of business and political interests at the cost of the rest of the nation,” he said.

He said this short-sighted and poorly-designed budget fails to address the real problems facing the nation.

“The budget favours those looting the country and siphoning off it,” he added.

Reza Kibria, son of slain former Awami League Finance Minister Shah AMS Kibria, said the budget of the current ‘unrepresentative’ and ‘unelected’ government does not reflect the will of the country’s citizens nor seek to meet the needs of the nation. “So, it’s vital that free and fair elections be held without delay to elect a government that will have a genuine mandate from voters.”

He said the government needs the confidence and support of the country’s people to take difficult steps needed to overcome the difficult economic challenges that lie ahead.

Analysing the budget, the  Gano Forum general secretary said it fails to provide realistic estimates of revenue and borrowing, and does not take into account the large deviations of outturns from the budget estimates in recent years.

He also said the budget demonstrates a lack of understanding of the risks posed by the looming financial and economic crisis brought about through imprudent and macroeconomic policies of the past few years and the systematic neglect of governance and supervision issue in the banking sector.

“All the indications are that the economy will soon face the impact of microeconomic mismanagement of the recent past. This budget shows a lack of comprehension of the real and present dangers facing the economy,” Reza Kibria observed.

He said unproductive expenditures must be curtailed and some tough decisions that go against the interest of some powerful quarters need to be taken.

The  Gano Forum leader said the official estimates of GDP growth are being questioned by many economists who have noted the puzzling weakness in import and revenue growth figures for the past few years. “The optimistic growth figures should be interpreted cautiously.”