A National Budget and the Prime Minister 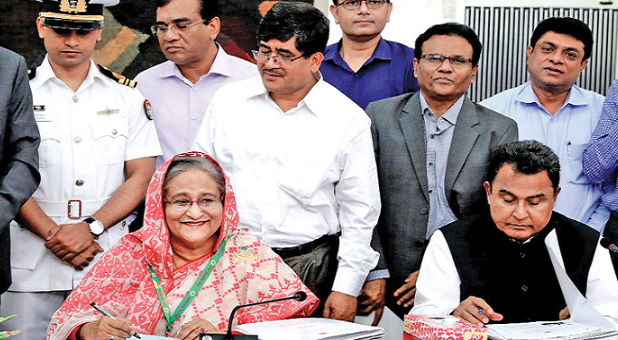 Prime Minister Sheikh Hasina often makes sudden moves that even surprise her critiques and the general people. In one such move during the last February Book Fair inaugural at the Bangla Academy, she was seen adjusting the shawl of Professor Anisuzzaman, one of her teachers from her university days. Professor Anisuzzaman is the Chairman of the Bangla Academy. Sheikh Hasina always holds her teachers in very high esteem, a culture that has practically died in the present day society.

On Thursday she created another unprecedented history when she presented the 48th national budget for the fiscal year 2019-2020 in the Jatiya Sangsad on behalf of the ailing Finance Minister A H M Mustafa Kamal. The post budget media briefing will also be done by the Prime Minister. It is the normal practice that the Finance Minister or equivalent in any country will place the national budget in the nation’s parliament if there is a functioning parliament. In both Pakistan and Bangladesh there was another trend when a military dictator took over the rule of the country the budget would be announced in front of the media by the finance advisor or the military ruler himself.

It happened during the rule of Ayub Khan in Pakistan and Zia, Ershad and the military backed Fakhruddin Ahmad in Bangladesh. Once announced the person concerned would take few questions from the attending media persons and the budget would be adopted. In the history of democratic nations it is unprecedented for the Head of the Government to present a national budget in the parliament and Sheikh Hasina made a history on Thursday by doing that.

The purpose of this commentary is not to go into the details of the budged; it is better done by economists, the print and electronic media, the opposition political parties and of course the CPD which till now have not found anything positive in any budget of any government expect the budget of 1/11 Fakhruddin Ahmad  government. The CPD and few of its senior members were beneficiaries of that unelected and undemocratic military backed government.  These days even the Peers, most of who are social parasites have also started commenting on the national budget.

The first budget of the newly independent county was presented in the parliament by the Bangabandhu appointed Finance Minister Tazuddin Ahmed who was also the First Prime Minster of Bangladesh when the government in exile was formed on April 10, 1971. On April 17 the new government took oath and under that government the Liberation War of Bangladesh was conducted. After return of the Father of the Nation Bangabandhu Sheikh Mujibur Rahman from Pakistan’s captivity on January 10, 1972 the government  was reshuffled on January 12th and Bangabandhu was made the Prime Minister and his party secretary Tajuddin Ahmad the first post-war Finance Minister of Bangladesh. In the month of June of 1972 Tajuddin Ahmad presented the budget on radio as the parliament was not in session.

The total amount of the budget was Taka 786 crore and practically it was entirely dependent on foreign aid and assistance as in a war devastated country. Generation or procurement of internal resource or revenue was impossible and sources were also too few. On top of that Bangabandhu cancelled all outstanding taxes on agricultural land and wrote off all the outstanding loans of the farmers. Bangladesh was an agriculture dependent country and virtually it was the foundation of the country’s economy.

The first budget focused on the rehabilitation of more than ten million displaced people and rebuilding the shattered infrastructure of the country and for benefit of agriculture and education. The major ports of the country Chittagong and Mongla were mined by the retreating Pakistan army along with blowing up of the two major railway bridges of the country, Bhairab and Hardinge Bridge. The only international airport Dhaka was reduced to rubbles due to the continuous bombing by the Indian Air Force. Seventy five million mouths had to be fed with not a grain of food in stock and no cash to buy anything from outside.

For a while the country resorted to barter trade with some East European country and it had only one product to exchange and that was jute. No government since independence faced such a Herculean socio-economic challenge. For a new born country it was a difficult time. It was due to the agility, perseverance, patience and patriotism of Bangabandhu and his colleagues that within three years the country managed to rise from the ashes of the war like the mythical phoenix bird and started to walk.

The country that started with a meagre total budget of Taka 786 crore which was totally dependent on foreign aid and assistance just announced a budget of Taka 5 lakh 23 thousand ad 190 crores with and ADP budget of 2 lakh 2 thousand and 721 crore Taka with focus on skill development, innovation and human resource development.

The country that began its journey preparing budget depending on foreign aid and assistance can now finance 85 to  90 per cent (including internal loans) from its own resources and out of the approximately  8 per cent comes from internal agencies and two per cent from grants, which is usually spent for financing development projects. It began preparing its budget for seventy million impoverished people has just now announced a budget for approximately 165 million people of which about 80 per cent lives above poverty line.

Even during Begum Zia’s four party alliance government of 2001-06, the bulk of funding for the national budget came from foreign aids and donor agencies. Her government’s last budget amounted to Taka 64 thousand crore (2005-2006). The just announced budget is eight times more than that. Every year there would be Aid Consortium meeting in Paris and Bangladesh’s Finance Minister Late Saifur Rahman would sit outside the meeting for the announcement of how much aid and assistance will be received from the international agencies like the World Bank, IMF and ADB and other donor countries.

Begum Zia’s Finance Minister was of the opinion that Bangladesh should be in the club of least developed countries as it will be eligible for such aids and assistance. It seemed Begum Zia and her government wanted Bangladesh to be in the league of countries of beggars forever. It was only when Sheikh Hasina formed the government in January of 2009 that she announced that no country depending on others for its socio-economic development can ever stand on its feet and a country of dignity and self respect something she repeated what her father said in 1972.

As Bangladesh is destined to become a middle income country by 2021 it is logical that the focus on development of human resources will get top priority and this human resource will be those with the right type of skills and know-how to take up the challenge of handling the ever changing world of knowledge and technology. The country needs more of such kind of human resource than just certificate oriented graduates.

Needless to say, creating useful human resource is not possible without creative teachers, trainers and instructors. While presenting the budget the Prime Minister rightly pointed out if needed the government would allow right type of such people from outside the country to come and work in Bangladesh, meaning making it easy for foreign teaches and trainers to come to Bangladesh to teach and train not only learners but also local teachers and trainers. She mentioned the era of Meiji Restoration (Emperor Meiji, Reign 1867 to 1912) who transformed a feudal inward looking isolated Japan into an open country, began phasing out feudalism and laid the foundation of industrialisation of Japan. Emperor Meiji is known as the founder of modern Japan.

He also laid emphasis in the development of human resources by reducing funding of the powerful Samurais (warrior class) and diverting the funds to other economic activities including industrialisation.

Meiji also allowed foreign trainers to enter Japan and help train the locals who mostly were good in serving their feudal masters. By the time of his death in 1912 Japan had undergone an extensive political, economic and social revolution and emerged as one of the great economic and military powers in the world stage.

Sheikh Hasina like her father always dreams of something big and works towards working for it. Her father dreamt of an independent Bangladesh and he achieved it. Bringing teachers and the likes may not be welcomed by many in the academic world but in reality today’s world of education is infested with mediocrity replacing meritocracy, the result of which is many meritorious young people feel more comfortable using their talent in another country as they often fall victim to the culture of nurturing mediocrity instead of merit in this country. To retain such talents this culture has to be stopped and special pay packages must be thought of teachers and trainers at all levels.

To transform the policy and idea of the government or the Prime Minister as announced in the national budget the unnecessary interference of the bureaucracy has to be downsized. The size of the budget is important but what is more important is the capability of implementing it. For this to happen right persons must be placed in the right place and the policy of zero tolerance to corruption at all levels must be continued. Thursday’s presentation of the national budget at the parliament by the Prime Minister has added another feather to her cap. Thank you Honourable Prime Minister.