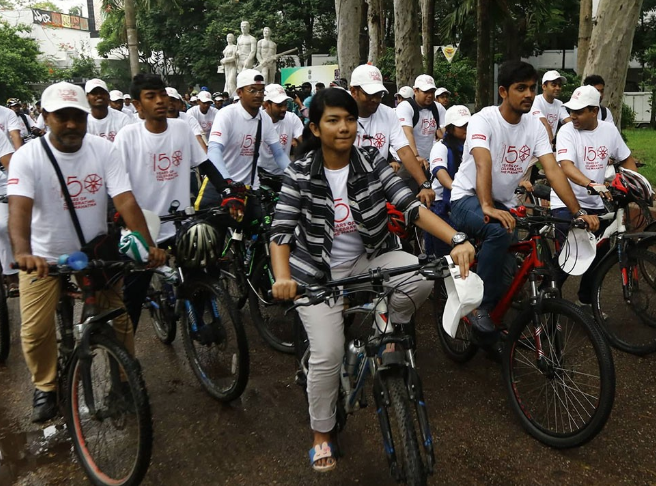 “We are living in a time when the messages and ideas of Mahatma Gandhi are more relevant than that of the time in which he lived. Even now, his life and messages inspire millions across the world,” Ganguly told the function.

She urged all youngsters to be imbued with the message of peace preached by Gandhi and carry them forward.

“We all are still inspired by Mahatma Ghandhi’s non-violence and non- cooperation movements,” the vice chancellor said told the rally staged by DU Cycling Club.

He urged the youngsters to follow Gandhi’s philosophy, ideals and messages to carry forward society and the civilization.

Indian government is sponsoring the celebrations across the world in a befitting manner to remember Gandhi.

“The cycling event is part of the celebrations,” an Indian high commission statement said.

A DU press release said they also exchanged views regarding the programmes being chalked out by Dhaka University to observe the birth centenary of Father of the Nation Bangabandhu Sheikh Mujibur Rahman in a befitting manner.

Dhaka University, it said, planned to organize a “Bangabandhu Lecture Series” as part of the celebration when several Indian academic figures were expected to deliver their articles.

Ganguly Das assured Akhtaruzzaman of providing all sorts of help and cooperation to make both DU and national level programmes a grand success.