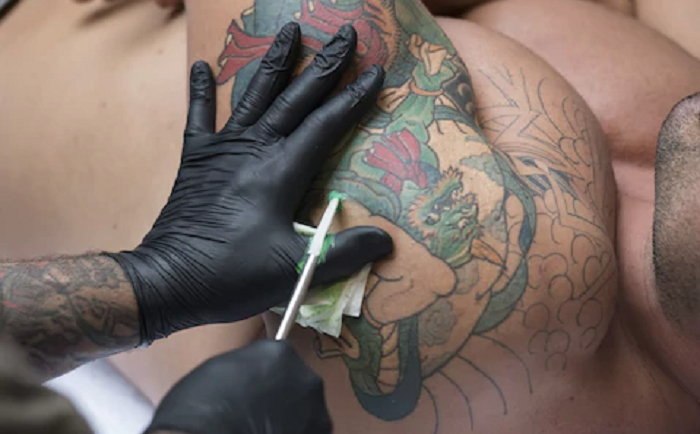 Shops offering tattoos and piercings pose an infection risk, and laws on who works in them should be tightened, say public health experts.

At present, anyone in the UK can set up a parlour and offer procedures without proper training, a report from the Royal Society for Public Health says.

But with one in five adults now having a tattoo, more should be done, it says, to protect the public. NHS England said higher standards were "long overdue".

"It shouldn't be left to pick up the pieces from dodgy tattoo parlours who don't take infection control seriously," its medical director Prof Stephen Powis said.

The Royal Society's report looks at so-called special procedures - tattooing, cosmetic piercing, acupuncture and electrolysis - which have all grown in popularity in recent years.

The procedures involve piercing the skin and, without good care by the technician and customer, bacteria and other organisms can get into the body, risking infection.

The report describes how a teenager with an infection in an ear-piercing ended up being put on a drip and having the top of her ear removed.

Infections can come from microorganisms living on the skin or those introduced to the body through dirty needles, the report says. These can include hepatitis, tuberculosis, syphilis and HIV.

Outbreaks of infection have been linked to tattooing and piercing in the UK and all four special procedures have caused allergic reactions, it adds.

What are the side effects?

While most people don't experience any negative effects, a survey of nearly 900 people found a small number did (18%) - with the most common issues being burning or swelling afterwards.

Two percent said they contracted a skin infection while one in 10 of those with side effects said they needed medical treatment.

In the same survey, 98% of people said training in infection control should be a legal requirement for anyone carrying out the procedures. But this does not currently exist anywhere in the UK.