Walsh expects ‘fighter’ Mashrafe to hit back with bang 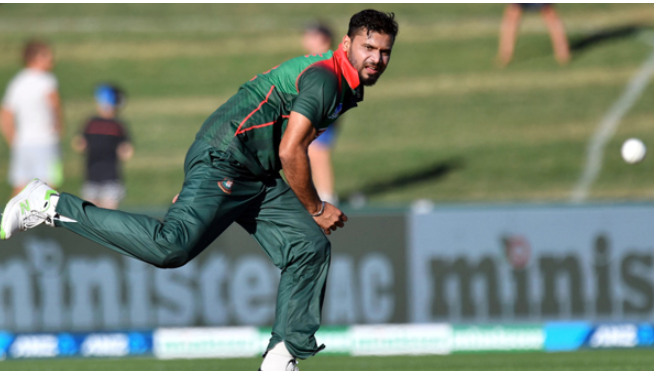 Bangladesh fast bowling coach Courtney Walsh believed that skipper Mashrafe Bin Mortaza will come back with all guns blazing to give the critics a befitting reply after being criticized heavily for his performance in the last three completed games in ICC Cricket World Cup.

The critics have recently come down heavily on Mashrafe after the ace pacer took just one wicket in Bangladesh’s three World Cup match. He has bowled 21 overs so far and gave away 149 runs, which also didn’t speak a volume of his consistency with bowling.

That he didn’t bowl his full quota of 10 overs in some matches, it also sparked criticism as people seemed to be enormously harsh on the captain who was the toast of Bangladesh cricket lovers less than a month ago after leading the country to their multinational trophy in Ireland.

Courtney Walsh, the mentor of Mashrafe and his fast bowlers, thought the criticism on Mashrafe is totally unnecessary and unfair given the fact that the spirit with which the captain plays his cricket and motivates the team.

“We all know Mashrafe is a fighter. He has a slight niggle,” Walsh told reporters in Taunton, referring to the hamstring injury Mashrafe picked up during the warm-up match against India on May 28.

“He has delivered good spells. We have to look after him pretty well. He is determined to lead the country up front. I think it is still early days.”

Before the World Cup, Mashrafe urged the fans to tone down the expectation but the fans seemed to have wanted more after Bangladesh beat South Africa in their opening game of the World Cup.

Bangladesh then lost to New Zealand narrowly by two wickets before suffering a 106-run defeat to England. Their last match against Sri Lanka was washed out due to rain.

Bangladesh will take on West Indies in their next fixture on June 17 at Taunton.

Though critics went hard on Mashrafe, his economy rate of 7.09 runs per over is actually less than that of Mustafizur Rahman and Mohammad Saifuddin.

Mashrafe was not at his best during the match against South Africa when he went wicket-less after delivering six overs. But he was the second-most economical bowler against England, conceding just 68 runs in 10 overs, when England plundered Bangladesh bowlers to all corner of the park to compile 386-6.

He could have been satisfied with giving away 50 runs in nine overs against England and kept his economy rate good, but the captain didn’t show any selfishness as he went to bowl his full quota and was hammered for 18 runs in the last over that made his bowling figure messy indeed.

“Obviously the fans want win, win, win; that’s not the case,” Walsh said. “We lost two games and one was rained out. If we can string a few wins together, I think they will see the depth of the team. Mash has a couple of days off, so that will help. He’ll be in a better place.”