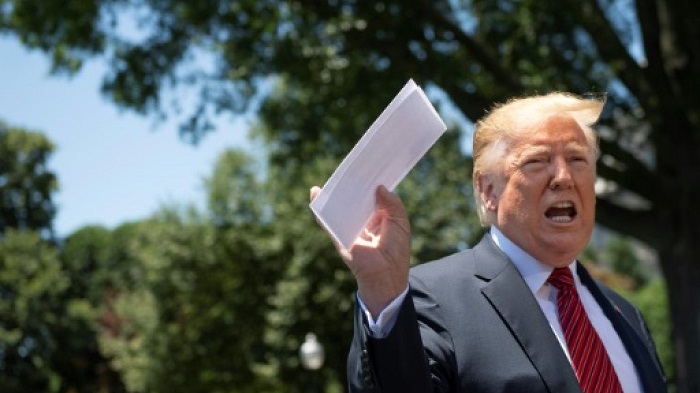 Mexico on Friday published the document that Donald Trump earlier flaunted as a secret deal to curb migration, but denied it had capitulated to the US president's demands for a so-called "safe third country" agreement.

Foreign Minister Marcelo Ebrard underwent a grilling in Mexico's Congress, where some lawmakers insisted otherwise and demanded more details on what exactly he agreed to in the last-minute deal brokered a week ago to dodge Trump's threat to impose tariffs on Mexican goods.

Angry over a surge of Central Americans seeking US asylum, Trump is pushing Mexico to agree to a deal in which migrants entering Mexican territory would have to apply for refugee status there, not in the United States.

The language in the "supplementary agreement" released by Mexico appears to resemble that. However Mexico's foreign ministry insisted the document -- signed by a deputy legal advisor to the ministry and his State Department counterpart -- was "not a binding bilateral agreement."

Rather, it says the two sides agree to immediately open talks to arrive at just that -- a "binding bilateral agreement" -- in which Mexico "would accept the return, and process refugee status claims, of third-party nationals" who cross its territory to reach the United States.

If in 45 days Washington decides that Mexico City's efforts to curb migration are not enough, then the Mexican government "will take all necessary steps under domestic law" to bring that agreement into force in another 45 days, the text concludes.

Trump had waved the one-page document in front of reporters Tuesday to fend off critics who said he had in fact extracted little in the way of new commitments from Mexico with his tariff threats.

Photojournalists managed to capture a few sentences that day, but the full contents had not previously been revealed.

They will now almost certainly add fuel to the raging debate over who got the best of whom in the Mexican tariff row.

Mexico's leftist President Andres Manuel Lopez Obrador has celebrated the reprieve from Trump's tariffs as a diplomatic victory, and his government is racing to show that it is taking decisive action during the 45-day grace period.

Under the countries' main deal, Mexico agreed to deploy 6,000 National Guardsmen to reinforce its southern border, and to expand its policy of taking back migrants as the United States processes their asylum claims.

Ebrard said the National Guard deployment will be complete by Tuesday, and that 825 additional immigration officers will start work this weekend.

In Washington, Trump appeared content to play nice with Mexico -- for now.

"Big difference in the border between now and this time last week. Mexico has been doing a terrific job. Hey, 6,000 soldiers, and if it doesn't work out, then we go back to very strong measures," he said on Fox News.

He added that if Mexico did not address the issue to his satisfaction, he would make it implement a safe third country agreement.

Any such deal would have to go through Mexico's Senate -- and lawmakers there look ready for a fight.

After reading the document Trump so dramatically pulled from his pocket, she said: "Mr Foreign Minister, to put it plainly, this is binding."

Her colleague Damian Zepeda of conservative opposition party PAN accused the executive branch of getting run over by the Trump administration.

"We still have the (tariff) ultimatum hanging over us, and on top of that we gave up the most precious jewel: we agreed to safe third country," he said.

There was even criticism from some in the president's party, Morena, which holds strong majorities in both houses.

They included the speaker of Congress, Porfirio Munoz Ledo, who says the Mexican government and Trump administration "want to turn our country into a cage" for migrants.

In a warning signal for Lopez Obrador, senators froze committee proceedings Wednesday on ratifying the USMCA, the country's new and important trade agreement with the United States and Canada, saying they wanted to question Ebrard on the migration deal first.

In another sign of turbulence, the head of the National Migration Institute, Tonatiuh Guillen, abruptly resigned Friday. He will be replaced by prisons commissioner Francisco Garduno, the government said.