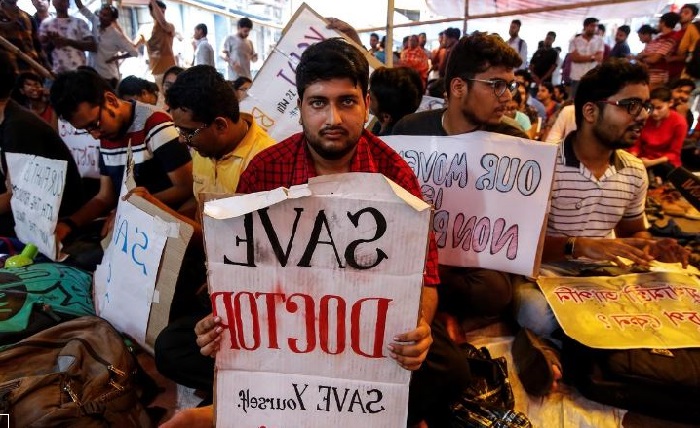 Healthcare system of West Bengal stared at an imminent collapse on Friday with more than 700 government-employed doctors and tendering resignations in an unprecedented show of solidarity with their striking junior colleagues.

Bangladeshi citizens, who have recently visited West Bengal for treatment purpose, are undergoing sufferings due to doctors’ strike in West Bengal.

The Bengal government appeared rudderless for most part of the day, with CM Mamata Banerjee -- who had been belligerent during her visit to the Seth Sukhlal Karnani Memorial Hospital (SSKM) on Thursday-- maintaining a studied silence.

Things started to change, however, towards Friday evening, with senior Trinamool leaders and ministers Partha Chatterjee and Firhad Hakim issuing conciliatory statements, condemning the attacks on doctors while pleading them to resume work.

The unprecedented number of resignations on a single day appears to have been triggered by the chief minister's response to the crisis on Thursday, when she issued an ultimatum at SSKM hospital, asking striking doctors to either return to work or face action.

Undaunted by the threat, junior doctors intensified the stir, with many senior doctors also joining them to express support. The principal and vice-principal at The Nil Ratan Sircar Medical College and Hospital resigned on Thursday, as did 21 senior doctors at the College of Medicine and Sagore Dutta Hospital on BT Road.

The state’s healthcare system has apparently been in a coma since Tuesday, due to a cease-work by junior doctors demanding security at hospitals. Mamata Banerjee visited the state-run SSKM hospital in Kolkata where she asked the agitating junior doctors, in turn, to get back to work. The doctors raised ''we want justice'' slogans at the West Bengal Chief Minister.

Mamata Banerjee has accused the BJP and the CPM of engineering the strike and playing "Hindu-Muslim politics".

Earlier, the strike started after a junior doctor was assaulted at a government-run hospital in Kolkata by the relatives of a deceased patient. The BJP said the Chief Minister is not taking action as the miscreants are "her voters". Doctors at Delhi's All India Institute of Medical Sciences and the Delhi Medical Association called for a strike on Friday.