Indian doctors to go on strike over workplace assaults 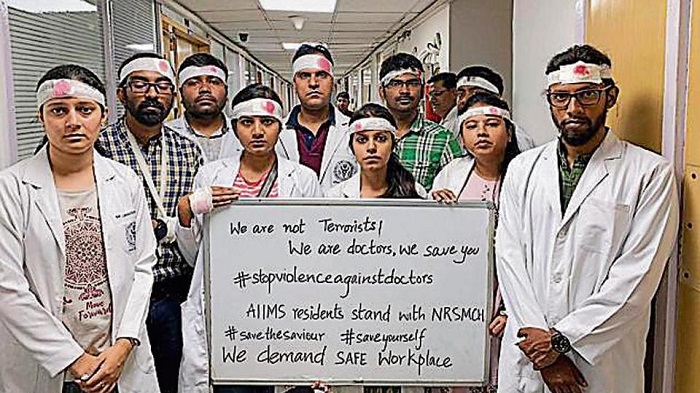 Indian health workers have called a nationwide strike next week to protest over growing safety concerns at work, after three doctors were badly beaten in the state of West Bengal, officials said Friday.

Tens of thousands of medical professionals across the country will skip work on Monday to demand legal protection for health workers who often face violence from families who allege patients have been neglected, the Indian Medical Association (IMA) said.

"We are demanding an immediate end to the violence against doctors. The strike is in response to a grave situation," R. V. Asokan, IMA's secretary general told AFP, adding the strike will not impact emergency services.

Asokan said more than 300,000 of the organisation's members began a three-day protest on Friday, wearing black badges to show solidarity with their colleagues in West Bengal.

Doctors across several states also wore safety helmets to symbolise the dangers they face at work.

Medical professionals in West Bengal's capital Kolkata have been on strike since Monday, when a family assaulted three doctors after a relative died during treatment at a state-run hospital.

The family alleged the death was caused because the doctors were negligent and lashed out violently, leaving two of the medical staff critically injured.

Police say they arrested four of the attackers and started an investigation into the assault.

Medical services across state-run hospitals in West Bengal remained crippled on Friday -- the fourth day of the rolling strike in the state -- with doctors marching in the streets demanding justice and protection.

"Patients' family and relatives hurl abuses and even assault us if they are unhappy with treatment of their dear ones," Aniran Majumdar, a protesting doctor in Kolkata, told AFP.

An ultimatum by the state government to end the protest has been ignored, with medical workers demanding the chief minister of West Bengal Mamata Banerjee apologise for comments they say trivialised the attack on the three doctors.

The federal health minister also appealed to the striking doctors to return to work.

Thousands of patients and their relatives seeking treatment were left to wait in front of hospitals in Kolkata amid reports of fresh acts of violence at some hospitals.

"I have been waiting for three days outside the hospital gate to get a blood transfusion for my son suffering from Thalassemia," Anita Monday, 34, who travelled from a village about a hundred kilometres away told AFP.

India spends less than two percent of its GDP on health care, making it one of the lowest investors in the sector globally, with the World Health Organisation placing it below both Iraq and Venezuela.

The country suffers from a lack of infrastructure and shortage of doctors, particularly in its vast rural areas.