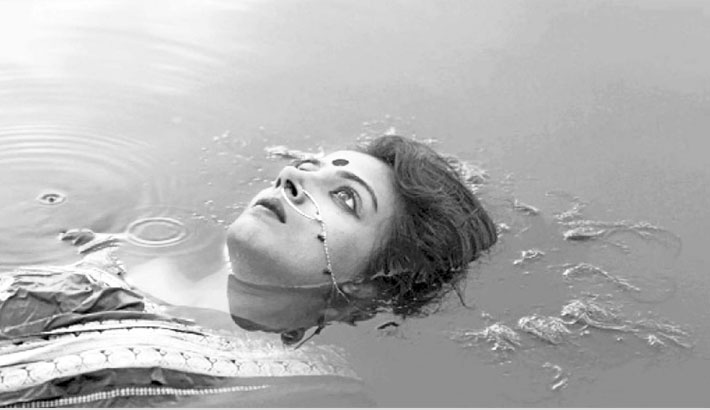 The short film will be screened, followed by a Q&A session, at the auditorium of Goethe-Institut Bangladesh in the capital’s Dhanmondi area on June 16.

The film ‘Kobi Swamir Mrityur Por Amar Jobanbondi’ is about a psychological journey of a woman named Rubi. Once she loved her husband devotedly, but the feeling is long gone. Sitting beside her husband’s dead body, she doesn’t feel any grief or any other emotion whatsoever. She remembers her life with this man, and discovers that her once beloved husband died to her long before his physical demise.

The programme ‘Through Her Eyes’ gives film enthusiasts, film students, academics, film professionals, funding agencies, broadcasters, rights groups and journalists a regular opportunity to watch films by women filmmakers currently working in Bangladesh and to interact with them directly at the end of the screening.

Tasmiah Afrin Mou is a young filmmaker from Bangladesh. Statement after My Poet Husband’s Death is her debut short film. Before this, she made a handful of Documentary films. One of her Documentary films Tokai-2012 received the Award for Best Short Documentary at Guangzhou International Documentary Film Festival, China in 2014. She is also known as a writer. Her short story book Baksha Bondi was published in 2015.