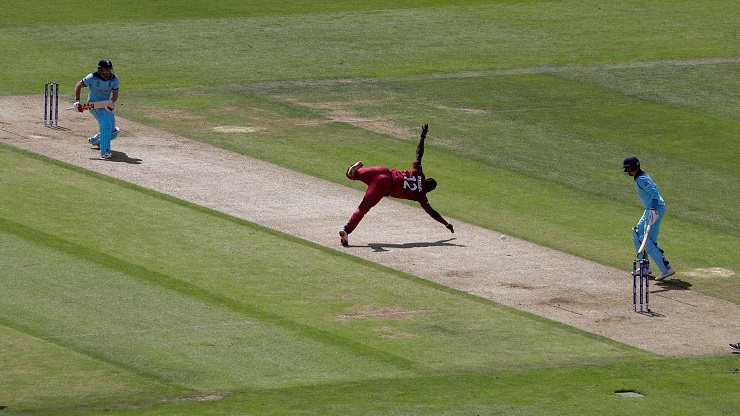 England made serene progress in chasing down West Indies' modest total of 212 in their World Cup match on Friday, with Joe Root opening in place of the injured Jason Roy.

The host nation were well-placed on 80 without loss after 12 overs in Southampton, with both Root and Jonny Bairstow unbeaten on 37.

Earlier, England contained the West Indies well but at a cost, with Roy and captain Eoin Morgan limping off the pitch.

Despite occasional flurries, the Caribbean side were never able to mount a sustained assault on England's bowlers after Chris Woakes and Jofra Archer conceded just eight runs off the first five overs of the match.

Fuelled by three wickets each for Archer and Mark Wood, England dismissed their opponents with more than five overs to spare.

Barbados-born Archer insisted he did not take extra pleasure from impressing against the country he was eligible to represent before choosing to play for England.

"It's just another game to be honest, but it was very nice to play against some of my friends. The pitch wasn't as quick as it looked, it was a little bit slow," Archer said.

"I am being supported well by the other guys. At one point they were looking like getting 300 so it was a real good effort to keep them below 220."

Opener Chris Gayle, dropped early by Wood in the deep, briefly threatened, hitting Woakes for 10 in two balls, but was caught by Jonny Bairstow on the square-leg boundary for 36 off the bowling of Liam Plunkett.

During the course of his innings Gayle, who has previously indicated this will be his last World Cup, overtook Viv Richards as the leading scorer in one-day internationals between England and the West Indies.

Two balls after his dismissal West Indies were in deep trouble at 55-3 when Shai Hope was trapped in front of the wicket by Wood.

Nicholas Pooran and Shimron Hetmyer combined to put on 89 runs for the fourth wicket before Test captain Root struck, catching Hetmyer off his own bowling for 39.

Root, only an occasional bowler, then struck again in his next over when West Indies captain Jason Holder (nine) could only pop the ball up for another caught and bowled

Andre Russell shone briefly but was caught by Woakes off the bowling of Wood for 21.

Morgan hobbled off the pitch in the 40th over, struggling to make his way up the pavilion steps and it was later confirmed he had suffered a back spasm.

The last four wickets tumbled for just 10 runs, with the West Indies looking short of a defendable total under sunny skies.

Earlier, Roy, who scored a century in England's win against Bangladesh, pulled up with an injury and had to leave the field.

It was announced he would not field for the rest of the innings, suffering with tightness to his left hamstring, and therefore cannot bat higher than number seven.