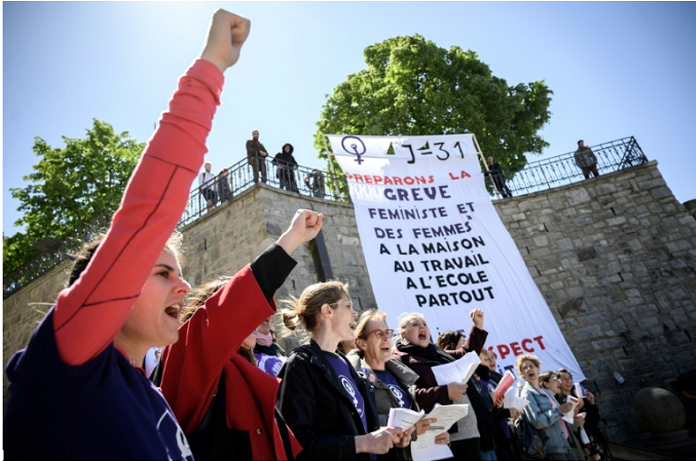 Statues draped in purple in Neuchatel, blocked traffic in Lausanne and a massive clenched fist feminist symbol projected onto a skyscraper in Basel: women across Switzerland went on strike Friday for equal pay.

They staged various actions to vent their frustration with persistent gender discrimination and wage gaps in the wealthy Alpine nation.

Events planned throughout the day range from pram marches to whistle concerts and giant picnics.

Huge demonstrations are planned Friday evening in several cities, including in front of the government headquarters in Bern.

Unions and rights groups organising the events are hoping to see a sea of purple -- the colour chosen to show solidarity with the cause -- but with thunder storms and rain drenching a country where work stoppages are rare, the turnout remains uncertain.

In Lausanne, the events kicked off overnight, with women ringing the bells of the cathedral, which was lit up in purple, and lighting a "bonfire of joy".

By morning, 500 people gathered for a massive breakfast celebration, blocking traffic on one of the town's main bridges, according to an AFP photographer.

In Zurich, demonstrators pulled a giant, pink clitoris perched on a cart through the city, while in Basel they projected the feminist fist symbol onto the skyscraper headquarters of pharmaceutical giant Roche.

In Bern, parliamentarians meanwhile took a 15-minute break from their discussions to mark the occasion, with many of the MPs and at least one government minister dressed in purple and sporting feminist badges.

The events come exactly 28 years after half a million women walked out of their workplaces or homes across Switzerland to protest persistent inequalities, on June 14, 1991. That was 10 years after equality between the sexes was enshrined in the Swiss constitution.

And for men and women with equal qualifications, the wage gap remains nearly eight percent, according to the national statistics office.

"Wage equality has not been achieved. That is a good reason to go on strike," Ruth Dreyfuss, who in 1998 became Switzerland's first female president, told the RTS broadcaster Friday.

Riding the wave of the global #MeToo movement, a new generation of women is attacking the lingering issues of discrimination, harassment and wage inequality with renewed vigour.

Organisers have called upon women to snub their jobs and housework for the entire day to help raise awareness about the vital contribution women make across society.

In some towns, nurseries are closed, while schools are ensuring only minimum service to allow the mainly women staff and teachers to take part in the day's events.

For those women unable to take a full day, the organisers urge them to at least pack their things and leave by 3:24 pm.

"After that, women work for free," said Anne Fritz, the main organiser of the strike and a representative of USS, an umbrella organisation that groups 16 Swiss unions.

Back in 1991, one in seven women in the country took part in the strike.

That was a remarkable turnout given that work stoppages have been extremely rare in Switzerland since employers and unions signed the "Peace at Work" convention in 1937. It states that differences should be worked out through negotiation rather than strikes.

Back then, many women were blocked from participating in the strike, and organisers fear a repeat Friday, with the country's main employers' organisation flatly opposed to the action.

Thursday's strike was born out of frustration at a bid to change the law to impose more oversight over salary distribution, which passed through the Swiss parliament last year.

The final text only applied to companies with more than 100 employees -- affecting fewer than one percent of employers -- and failed to include sanctions for those that allow persistent gender pay gaps.

Gaining recognition of women's rights has been a drawn-out process in Switzerland, which was one of the last countries in Europe to grant women the right to vote, in 1971.