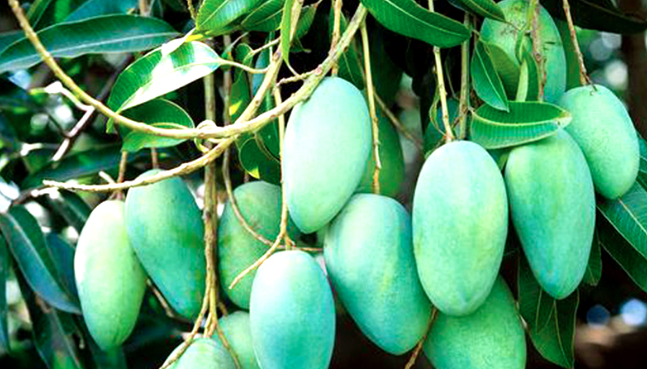 Bagha upazila in Rajshahi district has started exporting mango to seven foreign countries as it produces tasty and super quality mango for long.

Around 2.8 tonnes of Heemsagar and Langra varieties mango have already been exported to various chain super markets in England, Netherlands, Sweden, Norway, Portugal, France and Russia after meeting up the local demands.

Besides, Agora Super Shop in the capital took away five tonnes of mangoes from the area.

“We are exporting mangoes to the foreign markets for the last four years,” said Shafiullah Sultan, upazila agriculture officer.

The export of mangoes started through joint venture of Hotex Foundation and Bagha Upazila Agriculture Extension Office under the supervision of the Food and Agriculture Organization, he added.

Agriculturist Sultan further mentioned 50 mango orchard owners have been listed and were given certificates after giving them training on “Production of safe and insecticide free mangoes through best farm management”.

The trained farmers produce safe and poison-free mango weighting from 200 to 300 grams each. Samples of some of mangoes produced through these farmers were tested in the laboratory of BSTI in Dhaka to ensure those were pesticide and toxic chemical free.

A team from the Ministry of Commerce has already visited the mango orchards in Bagha. For the fourth time, mangoes of this upazila are being exported abroad.

“We have set a target to export 33 tonnes of mangoes during the current season,” Agriculturist Sultan said, adding that more than 8,368 hectares of land covered with mango orchards in the upazila and the growers earn around Taka 400 to 500 crore from the cash crop every season.

Two lead farmers of Kaligram village, Md Asafuddowla and Mohsin Ali, said the mango exporting venture has made the farmers happy in the mango-producing areas as they are getting good market price.

Shahin Reza, upazila agriculture officer in Bagha, said the export of quality mangoes from Bagha is increasing day by day. He expressed the hope that this year farmers of Bagha will be successful in exporting mango like that of last year.

A huge enthusiasm is being noticed among the mango farmers to export the fruit. Fruit bagging process in mango is gradually being popular among mango farmers of Bagha upazila.

Upazila administration was also regularly supervising the mango orchards to ensure production of quality mangoes there.

Dr Alim Uddin, principal scientific officer of Fruit Research Station, said the mangoes of Bagha being very good in taste, texture and quality,
which were now being exported to various countries.

To produce pesticide-free and quality mangoes, farmers of the areas are using ‘fruit bagging process’ to save the fruit from the pest attack and keep the texture of the fruit fresh and natural.

He further said the fruit bagging process also saves the mango from various natural catastrophes like excessive rain and storm and a fruit bagged mango does not damaged by being hit with branches during storm.