James Bond car to fetch up to $6M at auction 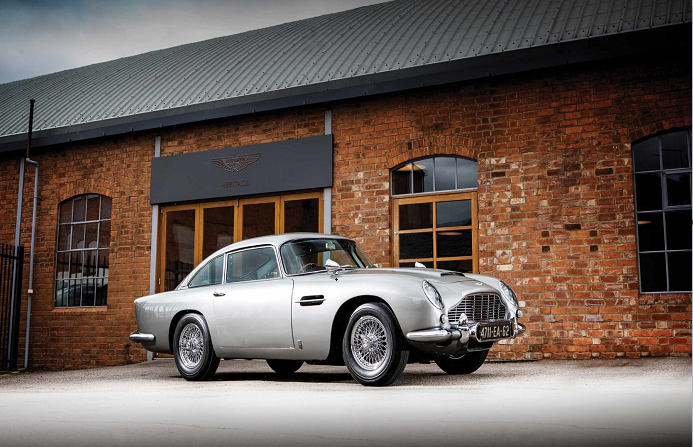 A fully restored version of the Aston Martin DB5, made famous by suave spy James Bond in the 1964 film "Goldfinger," is going up for auction.

On Aug. 15, a DB5 with full Bond modifications, including a Browning .30 caliber machine gun in each fender and wheel-hub mounted tire-slashers, will go under the hammer in Monterey, California, according to a press release from auction house RM Sotheby's.

Auctioneers estimate the car, one of only three surviving examples of the Bond-modified DB5, could fetch between $4 million and $6 million. (A 1964 DB5 used in the filming of "Goldfinger" and the next Bond film, "Thunderball," sold for $4.6 million in 2010.)

This particular vehicle is one of two built in 1965 for a US tour to promote "Thunderball," and has had just three owners in over 50 years.

"No other car in history has played a more important leading role on film and in pop culture than the Aston Martin DB5," Barney Ruprecht, a car specialist at RM Sotheby's, said in a press release.

"This is an unbelievably rare chance to play secret agent in a car that offers incredible performance and style in its own right and we're honored to offer the Bond DB5 alongside our partners at Aston Martin."

All of the Bond modifications are fully functioning following a full restoration, so the winning bidder will be able to make use of smoke screen dispensers, revolving license plates, and a passenger-seat ejection system.

The car will be displayed in North America this summer, with dates and locations to be announced.

In 2018 Aston Martin announced a limited run of 25 replica DB5s, kitted out with some of the same features as the Bond-modified model.

With a list price of £2.75 million ($3.5 million), the replicas are aimed at wannabe secret agents with cash to burn.