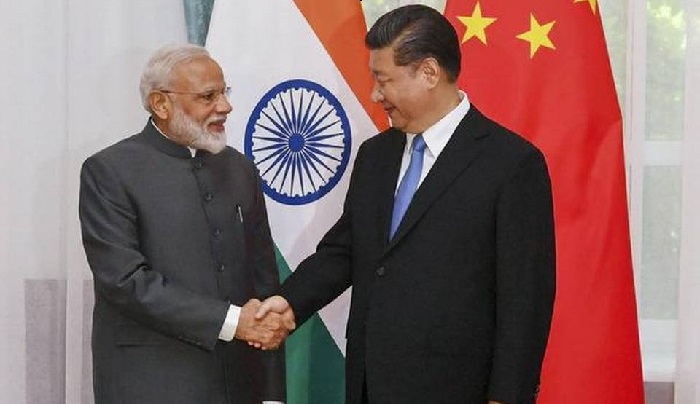 Prime Minister Narendra Modi and President Xi Jinping on Thursday agreed to expedite the dialogue on the India-China boundary issue for securing a “fair” solution.

The two leaders met in Bishkek, the capital of Kyrgyzstan, where they will participate in the summit of the Shanghai Cooperation Organisation (SCO).

“The two leaders have asked the Special Representatives to meet and carry forward the discussion and have instructed them to expedite the discussion in this regard for achieving a fair, reasonable and mutually acceptable solution, ” Foreign Secretary Vijay Gokhale said, describing the interaction as “substantive in content”.

The two leaders discussed the status of the bilateral relationship since the Wuhan summit of April 2018, which came in the backdrop of tension following the 73-day Doklam standoff. The attention on the border issue acquires significance as the Chinese President is expected to visit India later this year for a summit with Mr. Modi. Mr. Gokhale clarified that the discussion was held in the presence of the Special Representatives.

“President Xi Jinping very warmly confirmed his readiness to visit India this year. He said that he looked forward to discussing all issues from a strategic and long-term perspective and that both sides should begin intensive preparations for the visit,” Mr. Gokhale said.

He said both leaders agreed that the approach to the border issue should be “constructive”, keeping in mind the ties between both sides in the coming years.

Mr. Xi highlighted the need for regional cooperation and connectivity and singled out the Bangladesh-China-India-Myanmar (BCIM) economic corridor as an example for expanding the India-China ties, which had entered a “new phase” after the Wuhan informal summit.

Mr. Xi stressed that the two sides should adhere to the basic judgment that China and India are the opportunities for development and do not pose a threat to each other. “They must persist in deepening mutual trust, focusing on cooperation, and accepting differences, so that China-India relations become a more positive asset and positive energy for promoting the development of the two countries,” he said.

Both leaders discussed the plans for celebrating the 70th anniversary of the establishment of bilateral ties, with Mr. Modi proposing 70 events. Mr. Modi acknowledged China’s contribution to the listing of Pakistan-based terror mastermind Masood Azhar as a global terrorist at the United Nations Security Council and said Pakistan should create conditions for talks without the shadow of terror.

Thursday’s meeting was the first Mr. Modi held with the Chinese President since he won a landslide victory in the general election in May. He is expected to meet Mr. Xi in Osaka during the G20 Summit and also during the BRICS Summit. These meetings are being interpreted as preparatory rounds for Mr. Xi’s visit to India.

Mr. Modi also held talks with Russian President Vladimir Putin on Thursday. Mr. Putin invited Mr. Modi to take part in the Vladivostok forum in September. Russia had bestowed the highest state honour on Mr. Modi, which is expected to be presented during a ceremony in Russia during the visit. The Foreign Secretary said the issue of the S400 missile system was not discussed, though he indicated that defence issues figured at the talks.