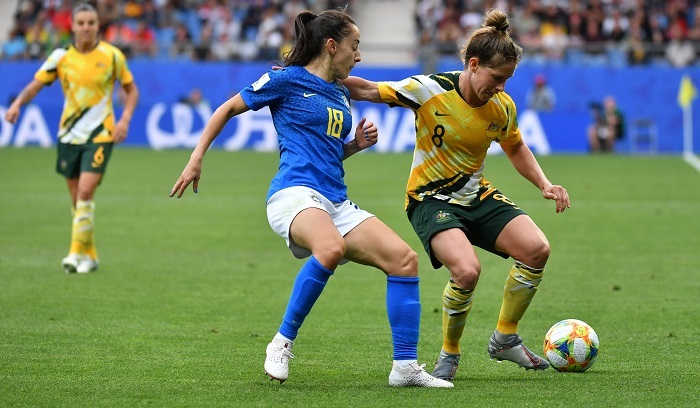 Australia fought back to beat Brazil 3-2 in Montpellier on Thursday and keep their Women's World Cup hopes alive.

Veterans Marta, from the penalty spot, and Cristiane, with her fourth goal at this World Cup, put Brazil two up after 38 minutes.

But they cracked under the Matildas' relentless barrage of crosses.

First, Barbara reacted too late to Chloe Logarzo's low cross and allowed it to bounce into the net in the 58th minute.

Then, Monica headed a long, hopeful Australian punt into her own net after 66 minutes with the goal standing after a VAR review.

The defeat could signal a changing of the guard for Brazil.

Marta, who has been battling injury, and 41-year-old midfielder Formiga, on a yellow card, went off at half time.

Cristiane, who is 34 and had scored her 11th total World Cup goal, followed with 15 minutes left and her team in desperate need of a goal.

The result leaves Australia and Brazil tied with Italy, who play their second match against Jamaica in Reims on Friday, atop Group C.

The forgiving format means the top three teams could go through to the last 16.