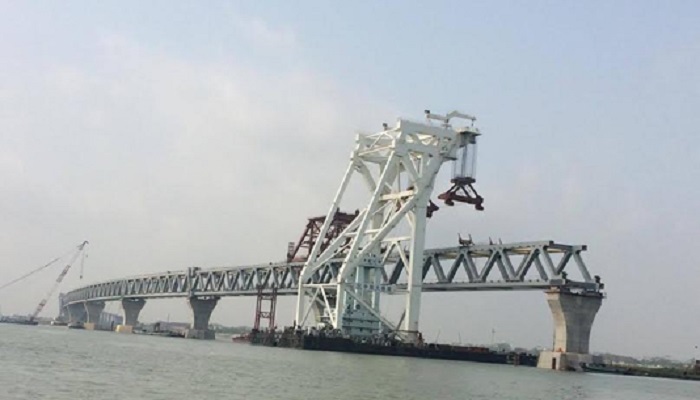 Finance Minister AHM Mustafa Kamal proposed Taka 61,455 crore for the communication infrastructure sector in the national budget of 2019-20 fiscal which was placed in the Jatiya Sangsad Bhaban on Thursday.

“We are implementing Padma Bridge, tunnel under the Karnaphuli riverbed, the Dhaka Elevated Expressway from Hazrat Shahjalal International Airport to Kutubkhali on Dhaka-Chattogram Highway and many other mega projects to establish an integrated and uninterrupted communication network in Bangladesh,” he said while placing the budget.

“About two kilometer structure of the Padma Bridge, being constructed entirely with our own resources, has now become visible, and the overall physical progress of the project is 67 percent,” he said, adding the 2nd Kanchpur, 2nd Gomoti and 2nd Meghna Bridge have been opened for traffic after completing construction ahead of the stipulated time.

The minister said South Asia Subregional Economic Cooperation road connectivity projects 1 and 2 are being implemented in order to be connected with the global transport network to reap the benefits of globalisation.

The minister said the government is implementing the Revised Strategic Transport Plan (2015-35) to develop internal road networks in the Dhaka metropolitan area, reduce traffic congestion at the entry and exit points of the capital and establish a planned as well as integrated modern public transport system in Dhaka and its adjacent areas.

Under this plan, Kamal said the construction of the first Metro Rail in Bangladesh, MRT Line-6 from Uttara to Motijheel is in progress. Alongside, the implementation of Bus Rapid Transit or BRT from Hazrat Shahjalal International Airport to Gazipur is underway.

He said steps to build a safe, environment-friendly and modern IT based road transport and control systems are underway. A plan has been taken up to install directional sign-signal and kilometer posts in 8,100 spots, he added.

Kamal said the present government is attaching a top priority to the railway sector in order to make railway an economical, safe and environment-friendly mode of transport. For the overall development of railway, the government has undertaken a 30-year master plan spanning from 2016 to 2045 at a cost of Taka 5,53,662 crore, he added.

Kamal said development of necessary infrastructure and facilities at sea ports are also in progress. “A plan for construction of the Bay-Terminal at the Chattogram port at a cost of Taka 17,000 crore has been undertaken. The handling capacity of the Chattogram port will be enhanced in the next financial year from 2.8 million TEUs to 3 million TEUs,” he added.

The budget for the communication infrastructure sector was Taka 53,081 crore in the last fiscal.