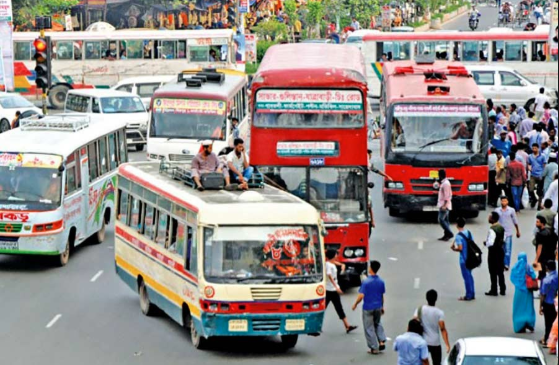 Finance Minister AHM Mustafa Kamal on Thursday said steps have been taken to create a pool of skilled drivers to ensure road safety.

“Steps to build a safe, environment-friendly and modern IT-based road transport and control system are underway. We’ve identified 121 black spots on national highways and taken preventive steps,” he said while placing the national budget for 2019-20 fiscal year in Parliament.

The finance minister said a plan has been taken to install directional sign-signal and kilometre posts in 8,100 spots. “Steps have been taken to build a separate lane for slow moving vehicles.”

Besides, mass awareness programmes, including seminar, and sticker and leaflet distribution activities are going on, he said, adding that four automated vehicle inspection centres have been set up in Dhaka, Chattogram, Rajshahi and Khulna divisions.

In his budget speech, the finance minister proposed Tk 523,109 crore for the communications sector in the national budget for 2019-20 fiscal year to build a safe, environment-friendly and modern IT-based road transport and control system.

Mustafa Kamal said a modern, safe and environment-friendly transportation and communication infrastructure is required to sustain economic development, and achieve a higher growth for the country.

Considering communication infrastructure, especially the railway, as one of the priority sectors, the government has taken up and is implementing numerous projects, he said.

“To transform our country into a developed one by 2041, we’ve taken steps to develop and repair roads and highways, build new roads, construct flyovers/overpasses and bridges/culverts, Mustafa Kamal said.

He said steps have been taken to gradually upgrade all national highways into four lanes or above to modernise the road transport system.

In this respect, 509 km national highway has been upgraded into four lanes while upgradation of another 507 km highway is going on, the finance minister said.

Narrow and damaged bridges and culverts are being rebuilt. Rehabilitation, development and repairs of zone-based district highways are underway.

SASEC Road Connectivity projects 1 and 2 are being implemented in order to be connected with the global transport network so as to reap the benefits of globalisation, Mustafa said, adding that steps will be taken to replace the risky bailey bridges with concrete ones.

“To develop internal road networks in Dhaka city, reduce traffic congestion at the entry and exit points of Dhaka, and establish a planned and integrated modern public transport system in Dhaka and the adjacent areas, we are implementing the Revised Strategic Transport Plan (2015-35),” the finance minister said.