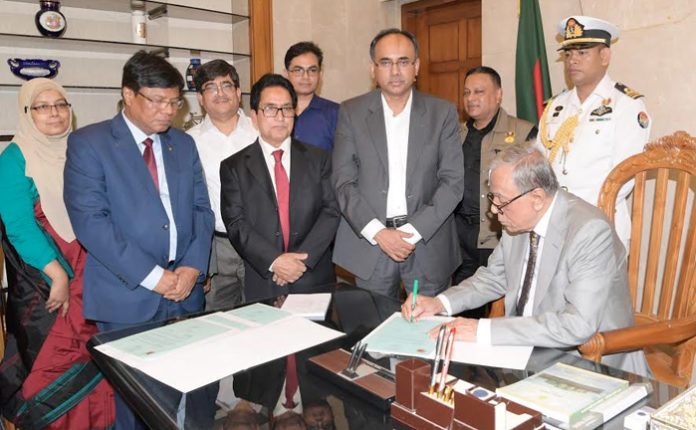 President M Abdul Hamid today authenticated the national budget for 2019-20 fiscal and the revised budget for 2018-19 for placing before the Jatiya Sangsad by Finance Minister AHM Mustafa Kamal.

The head of the state authenticated the budget at his Jatiya Sangsad Bhaban (Parliament complex) office at about 3:10 o’clock on Thursday afternoon.

Finance Division’s Acting Secretary Abdur Rouf Talukder and Chairman of the National Board of Revenue (NBR) Md. Mosharraf Hossain Bhuiyan and secretaries concerned, among others, were present there.

Earlier, on his arrival , the President was received by deputy speaker Advocate Fazle Rabbi Miah and senior officials concerned.

The President exchanged views with the officials and employees of the Jatiya Sangsad, where he served as the speaker, deputy speaker and several times as elected MP.