Why did Messi walk away from Argentina? 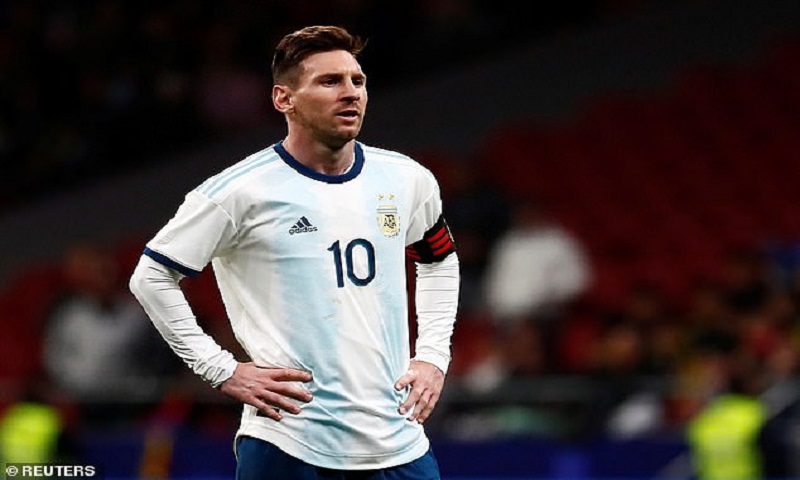 Argentina have always known that Lionel Messi is a rare gem, to be treated with extreme care.

But 14 years after his senior international debut, the Albicelestes still haven't succeeded in bringing out his best. And the clock is ticking.

When it comes to representing his native country, Messi, soon to turn 32, seems trapped in a time loop.

Every tournament raises massive expectations, every tournament ends in massive frustration. He lifted the Under-20 World Cup in 2007 and won gold at the Beijing Olympics a year later, but has never celebrated a major international title.

"I have to stand up and try again, no matter how many times I fall. This is a good message for the kids, not just in football, but in life. I want to retire having won something with Argentina," Messi said this month.

With the Copa America about to get under way in Brazil, captain Messi knows it will be one of his final chances to win a major trophy with Argentina. Some of his worst moments in football have been experienced pursuing this elusive prize.

Messi is Argentina's all-time top scorer with 67 goals, and is not far from becoming their most capped player. He has played 130 times, 17 less than the now retired Javier Mascherano.

But the eight major competitions in which he has appeared for Argentina (four World Cups, four Copa Americas) raised one major question each time: why couldn't he be the same player Argentines enjoy week in, week out, watching Barcelona on TV?

There have always been two Messis. On the one hand, there is the serial winner moulded by Pep Guardiola into a false nine who excelled in one of the world's finest club sides, having played with pals Andres Iniesta and Xavi since he was a kid in Barca's youth academy.

On the other hand, there is the outsider in a turbulent national team full of egos, an unsettled and uncomfortable presence who went an incredible 16 games over two years without scoring a goal, between 2009 and 2011.

Every Copa America brought crisis. Every World Cup raised doubts over his future. Battered, criticised, silent, stressed and stranded - just when Argentines thought they might have broken Messi, he would return to Spain and immediately appear miraculously healed.

Barca was his shelter, where footballing doubts perished and his leadership re-emerged unscathed. Every magical renaissance added nothing but more critics from the other side of the ocean. Why there and not here? What are we doing wrong? What does he need? With every renaissance, more expectations followed. The higher the hopes, the heavier the critics. Over and over again, the cycle would repeat.

But now there's finally a refreshing twist in this plot. Now, the broken Messi comes from Barcelona.

Defeat by Liverpool in the Champions League semi-final meant a shocking, unlikely exit from the competition for a second year in a row. Then there was another loss in the Copa del Rey final, to Valencia. Barca may have comfortably won La Liga, but expectations were higher and recent press rumours have criticised Messi and his best friend Luis Suarez as "not positive" leaders inside the dressing room.

What if the odds have finally changed? What if Argentina, finally, becomes Messi's healing clinic?

Behind Argentina's hopes to put an end to the 26-year title drought, there is a deeply split community of fans. Some see Messi as a saviour, others are waiting for him to fail, when they will seek to expose him again. Debate around Argentina's captain has, once more in the build-up to a major tournament, incensed two antagonistic, almost irreconcilable positions.

For the younger generations, Messi is a god, their god. For older people, comparisons with Diego Maradona are inevitable - and Messi will never be Diego. He will never win a World Cup single-handedly, like Maradona is considered to have done in 1986. Perhaps even if Messi were to, it would never be enough.

Since his debut for the national team, Messi has been publicly accused of being too selfish, not singing the national anthem, not socialising with team-mates, not following orders from managers, not caring enough, not scoring enough, not being a number 10, not being a number nine, not handling the pressure, interfering in selection and overruling tactical plans. He started suffering critics as a 17-year-old kid, and is still being criticised as a father of three boys.

It sounds odd, given he has won the Ballon d'Or a joint record five times, given all the trophies, all the brilliant achievements of his club career. But the anti-Messi mood in Argentina blossoms after every bad result or unconvincing performance.

In the 2018 World Cup qualifiers, Messi's impact was at maximum as he scored a hat-trick that finally secured a place in Russia, in a vital 3-1 win in Ecuador on the final matchday.

But the World Cup itself did not follow the same script. There was a missed penalty against Iceland in Argentina's opening match, and below-par performances in the rest of the games.

After a 4-3 defeat by France that meant elimination in the last 16, it was unclear whether Messi would play again at a World Cup. It seemed like he may never play for his country again, full stop. Team-mates Mascherano and Lucas Biglia quit international football. Then followed Gonzalo Higuain.

"We need to start over without the old generation," said AFA official Nicolas Russo last summer.

"If we'd won, all the players would have been here to celebrate. But we lost and the plane that landed back home was carrying only one player. This is not acceptable. The captain, as captain, must explain what happened and lead his team-mates. Things must change. We need to set norms."

The first change saw Jorge Sampaoli sacked as manager in July. Lionel Scaloni would replace him.

Scaloni was one of Sampaoli's assistants in Russia, the sole survivor of his entire backroom staff. A former wing-back who spent eight years as a player at Deportivo La Coruna before joining West Ham on loan in 2006, Scaloni is an inexperienced manager. In his first appointment, he was the man tasked with setting foundations for a Messi-less reconstruction.

Until just three months ago, his international future was blurred. Plenty of rumours still suggested he would not accept returning to a dressing room that had been "deactivated", as the Argentine press put it. None of the old generation were there. None of his old friends were there.

Messi had already announced his international retirement once before, in 2016, moments after missing a penalty in a shootout against Chile in the Copa America Centenario final.

"That's it. This is not for me. We've lost again. Another final. I'm not meant to be here," he said in the mixed zone after the game.

But after a holiday and time to reflect with his wife Antonella, he decided to come back. He grew a beard and dyed his hair blonde to strengthen the idea of a fresh start. Crucial goals rescued Argentina from the real possibility of not qualifying to Russia.

The one man who always tried to remain close to Messi was Claudio Tapia, who became AFA president in March 2017.

As the AFA considered how to reshape the national team, and how to bring Messi back into the fold once more, Tapia had a bold idea: to send a public message to Pep Guardiola. With Guardiola as manager, he thought, Messi would surely come back.

"A contact (with Guardiola) was made, and then we had to run away because we needed to sell the AFA in order to pay him," Tapia told reporters in August 2018.

"First, no-one never contacted me. Then, it is not very nice to have the president of the Argentina FA speaking about my salary, because he does not know my salary. And it is clear that I have a contract with Manchester City and I will honour it, and it is also clear that Argentina has very good managers and that it is an Argentinean manager that should take over Argentina."

Instead, the former Argentina and Valencia midfielder Pablo Aimar, Messi's idol, was asked to assist Scaloni. It was another signal sent out towards Barcelona. Aimar is a symbol of serenity. The serenity that had been asked for.

Messi returned in March, in a friendly match in Madrid against Venezuela, which Argentina lost 3-1. Angel di Maria had been recalled too, and soon Sergio Aguero would also be welcomed back.

"I see a very united group - guys who really like to be here," Messi said. "My son Thiago had asked me why I wasn't in the team. The atmosphere is very good. I'm just another player, there's nothing strange."

The same chasm is also present in football. In Argentina, there will never be an agreement about Messi.

Some people think he is a shy, misunderstood soul, others define him as a selfish leader. None of them would ever accept they can be wrong in their judgement, but it is difficult to deny Argentina have travelled to Brazil with one of their weakest teams in decades.

Messi, Aguero and Di Maria represent the old school, and Paulo Dybala, Nicolas Otamendi and Nicolas Tagliafico stand out as top international footballers with World Cup expertise. The rest of the players are either young and promising, such as Inter forward Lautaro Martinez and Tottenham defender Juan Foyth, both 21, or veterans without international experience, such as defender Milton Casco and striker Matias Suarez, both of River Plate and both 31.

There is a majority of players aged from 23 to 28. This is the new generation that Scaloni wants to grow. Boca Juniors goalkeeper Esteban Andrada, Watford's Roberto Pereyra, Marcos Acuna of Sporting Lisbon, Leandro Paredes from Paris St-Germain, Giovani lo Celso of Real Betis. This is the group it is hoped will be led by Ajax's 26-year-old full-back Nicolas Tagliafico, captain in Messi's absence, and Dybala, with the sights set on the 2022 World Cup in Qatar. Juventus forward Dybala was supposed to be Messi's natural replacement, yet after a difficult season in Italy he was almost left out of the squad.

When projecting the future, the motto inside Argentina's camp for the past year has been. Without Messi, it's impossible. Just with Messi, it's not enough.

"I saw him really affected by what happened in the Champions League, being eliminated in a game that he considered almost resolved, worried about the future," Menotti wrote in a column for newspaper Sport.

"But despite the mental fatigue, this won't change his competitive soul or his commitment towards Argentina. Actually, despite the long trip, he chose to train upon arriving. And when he saw a ball, he smiled."