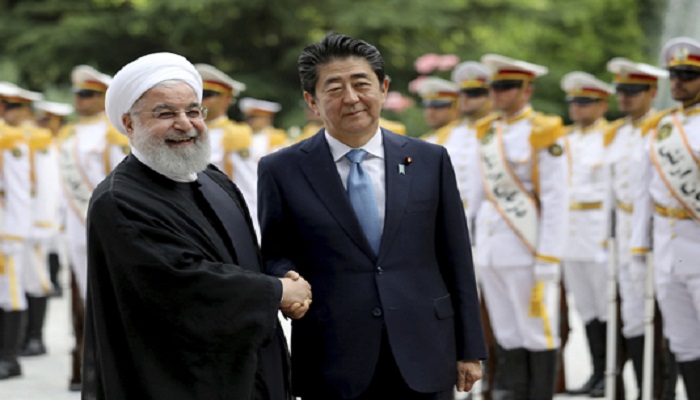 Iran has been locked in a bitter standoff with the United States since US President Donald Trump withdrew from a landmark 2015 nuclear deal in May last year.

Washington has since reimposed crippling unilateral sanctions — which have forced Tokyo to halt its once-substantial purchases of Iranian oil — and launched a military buildup in the Gulf.

“It is essential that Iran plays a constructive role in building solid peace and stability in the Middle East,” Abe told a joint news conference in Tehran with Iran’s President Hassan Rouhani.

“Today, tension is rising in the Middle East. Some experts point out that the conflict might be triggered accidentally,” said Abe.

An armed clash “must be avoided by all means”, the premier stressed.

He added that Japan “wishes to play an utmost role in its capacity to ease the tension. This is the one single thought that brought me to Iran.”

Addressing the same news conference, Rouhani said he expected a “very positive change” in the Middle East and the world if the United States stops its economic pressure on Iran through sanctions.

“If there are some tensions, (their) roots stem from America’s economic war against Iran. Whenever it stops we will witness a very positive change in the region and the world,” Rouhani said.

“We will not initiate a conflict in the region, even against the US, but if a war starts against us we will then give a crushing response,” the Iranian president added.

Abe began his visit to Iran on Wednesday, the first by a Japanese prime minister in 41 years, with the stated aim of defusing tensions between Tehran and Washington.

Japan stopped importing Iranian crude oil in May to comply with US sanctions against the Islamic republic.

The Asian powerhouse has an interest in keeping the Middle East stable in order to ensure the flow of cheap hydrocarbons to fuel its economy.

Rouhani said he saw “Japan’s interest in continuing to buy oil from Iran and fixing financial issues” as a “guarantee” for the ongoing development of bilateral ties.

The spokesman for Japan’s foreign ministry, Takeshi Osuga, later said that, on the questions of Iranian oil sales to Japan, “our understanding is that this was the wish of the Iranian side.”

But he added: “Oil purchase (from Iran) is the decision of private companies. I cannot predict their decision.”

The Iranian president also underlined a convergence of views with his visitor on the issue of nuclear weapons, which he said “both of us are against”.

Abe, for his part, expressed his “deep respect to the fact that the supreme leader Ayatollah Khamenei reiterates the fatwa which says ‘nuclear weapons and other weapons of mass destruction are against Islam'”.

The Japanese premier is expected to meet Khamenei on Thursday morning.

Abe discussed “the situation in Iran” in a telephone call with Trump on Tuesday, a Japanese government spokesman said.

The Japanese prime minister won Trump’s blessing for the mediation mission when the US president visited Tokyo last month.

“We believe it is extremely important that, at the leadership level, we call on Iran as a major regional power to ease tension, to adhere to the nuclear agreement and to play a constructive role for the region’s stability,” Japanese Chief Cabinet Secretary Yoshihide Suga said.

Iranian newspapers were divided along conservative-reformist lines in their assessment of Abe’s visit.

The reformist Sazandegi daily ran a front-page cartoon of Abe in full samurai armour, a rolled piece of paper in one hand and a shield on the other.

In an accompanying article headlined “A samurai in Tehran,” the paper said everyone was waiting to see “Tehran’s reaction to Japan’s initiative to raise its international standing by mediating as both Washington’s ally and Iran’s friend.”

The ultraconservative Javan daily warned that “Iran and Japan minus America” could be a winning formula for Abe, but “Japan as America’s intermediary in Iran” would fail given the deep mistrust of the US.

Other Iranian commentators said Abe could pass messages between the two sides.

But while Tokyo has longstanding trade ties with Tehran and a strategic alliance with Washington, experts say Abe has little leverage with either side and mediation will be an uphill struggle.

The trip by the Japanese premier “faces substantial obstacles and is unlikely to bear fruit,” said Tobias Harris, an analyst at Teneo consultancy group.

“While Japan has good relationships with countries on both sides, these relationships do not necessarily translate into influence.”