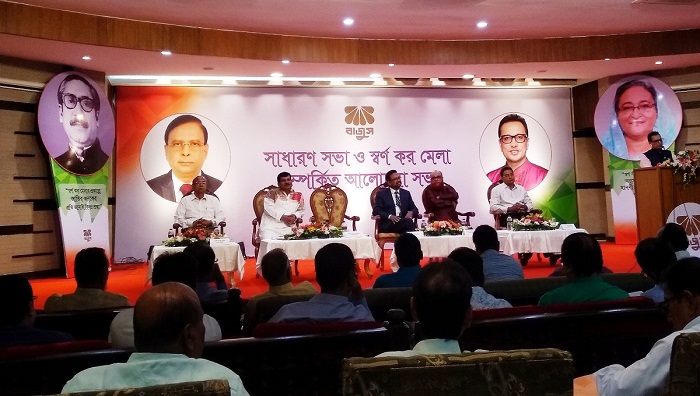 A three-day long gold fair will be held at Dhaka’s Hotel InterContinental between June 23-25 following the government’s offer to legalize undeclared gold.

Bangladesh Jewellers Samity or Bajus General Secretary Dilip Kumar Agarwala announced it to the media at a discussion meeting at the Officers’ Club, Dhaka.

Dilip noted that earlier there were no rules and regulations relating to gold in the country. On behalf of Bajus, he thanked the government of Prime Minister Sheikh Hasina for bringing in the legal framework within which they can now operate with a certain confidence.

“If the government supports us then we can have a positive role in the Gross Domestic Products (GDP) of the country’s economy. We want to build a modern jewellery institution to compete in international markets,” he also said.

Dilip Kumar also added, “We will organise gold fair on June 23 to 25 in Dhaka. Finance Minister AHM Mustafa Kamal will inaugurate the fair. It will open from 10am to 5pm. Besides, the fair will be held on June 23 and 24 in divisional cities.”

“A vested quarter discouraged traders to attend the fair and said that if you attend it, you may face problems later. However, don’t be afraid. National Board of Revenue (NBR) has assured us that there will be no hassle. So I urge all gold traders to take part in the fair,” he also added.