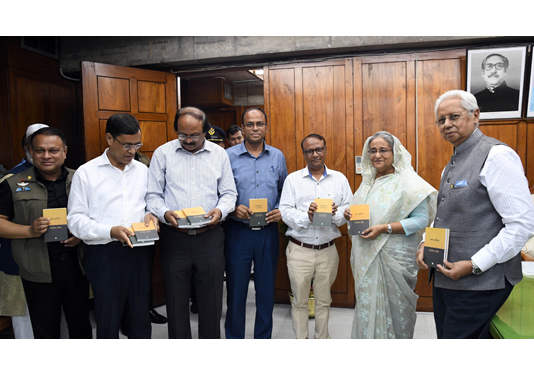 Pathak Somabesh, a renowned publishing house of the country, published the two books.

Shahidul Islam Bizu, managing director of Pathak Somabesh, handed over the two books to the prime minister at her Jatiya Sangsad Office in the capital on Wednesday evening.

Pathak Somabesh said Prime Minister Sheikh Hasina is a glittering star of Bangladesh’s history. She adorned the seat of a world leader from ‘Jananetri’.

The prime minister has huge contributions to the country’s development and welfare of the people. Simultaneously, she thinks about the international community in the United Nations and the global forum, it said.

Sheikh Hasina has also been acclaimed by the people as the mother of humanity which is above a statesman. She is encouraging the people in the sense of humanity and working for the human welfare.

“In this realisation, every word, comment, opinion, directive, advice and thinking is very precious. We think it’s our moral responsibility to preserve those in the form of books by collecting,” the publishing house said.