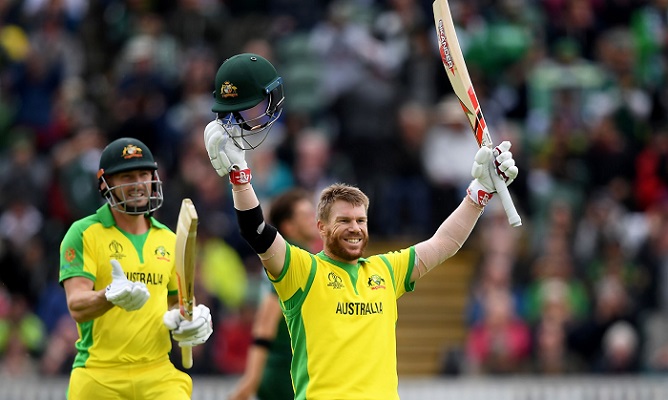 David Warner brings up Australia's first century of the ICC Men's Cricket World Cup 2019 against Pakistan at The Cooper Associates County Ground in Taunton on Wednesday.

Aaron Finch has fallen after scoring a quickfire 82 as Australia made a solid start after being sent in to bat by Pakistan in their World Cup match at Taunton.

The Australian openers had survived a probing opening spell by Mohammad Amir to reach 0-146 off 22 overs before Finch fell to Amir from the first ball of the 23rd.

At the other end, David Warner had brought up a half-century of his own, reaching the milestone from 51 deliveries shortly before Finch's dismissal.

Coming in at No.3, Steve Smith couldn't replicate the back-to-back fifties he scored against West Indies and India, caught off the bowling of Mohammad Hafeez for 10 (13).

Roared in by chants of "Amir, Amir" from the Pakistan fans in the crowd, the left-arm quick was on target right from the first ball of the match, beating Australia captain Aaron Finch's outside edge.

That first over was a maiden and Amir bowled two in a four-over spell in which he conceded a mere 11 runs.

Finch should have been out for 26 in the 13th over when he edged Wahab Riaz, one of three left-arm quicks in the Pakistan side, only for first slip Asif Ali to drop a head-high chance that burst through his hands before going for four.

Earlier, Australia have drafted Shaun Marsh into their XI to replace the injured Marcus Stoinis, while Kane Richardson replaces leg-spinner Adam Zampa in a seam-heavy attack as they look to return to winning ways against Pakistan in their fourth World Cup match at an overcast but dry Taunton.

Captain Aaron Finch lost the toss and the five-times World Cup winners will bat first after Pakistan skipper Sarfaraz Ahmed stuck to his pre-match prediction of bowling first at a venue where the temperature is expected to top out at a chilly 15 degrees today while ominous grey skies loomed overhead.

The change means Australia - who would also have bowled first if the coin fell their way - enter the match with four front-line seam bowlers and no specialist spinner, meaning Finch – who was seen bowling in the nets before the toss – will have to rely on himself, Glenn Maxwell and Steve Smith to make up the balance of the fifth bowler's overs.

Stoinis injured himself bowling at the death in Australia's 36-run defeat to India in London on Sunday evening, picking up a side strain that has seen allrounder Mitchell Marsh rushed over to England as cover.

Stoinis has not been ruled out of the tournament and will be given time to see how his side strain responds, but his injury and the uncertain weather conditions meant Australia needed a selection rethink.

The loss of the sole seam-bowling allrounder in the Australian squad had upset the balance of the Australian team, and the prodigious wet weather in the lead-up to this match also had Australia pondering some left-field changes.

The inclusion of Richardson gives Australia another noted death-bowling specialist to replace Stoinis with the Western Australian joining Mitchell Starc and Pat Cummins in the attack, while Adam Zampa remains the sole specialist spinner in the XI.

On match eve, Finch said Australia were open to replacing Stoinis with a specialist bowler and bumping wicketkeeper Alex Carey up to No.6, a ploy that was eventually discarded largely because the weather had cleared enough to not cause any delay before the coin toss.

"We're going to have to juggle around that allrounder spot," Finch told reporters on Tuesday.

"We've got to find a few more overs now, whether we play the extra batter or extra bowler, we'll wait and see, and especially tomorrow with the conditions.

"It's one of those things we'll have to weigh up and have a look and have a think about it this afternoon and come up with what looks like the best XI to beat Pakistan."

Taunton's drainage upgrade in 2017 appeared to be paying dividends with puddles and pools of water on the playing surface evident on Tuesday had disappeared on the morning of the match.

The UK has already experienced twice the monthly average of rain for June and after matches on Monday and Tuesday were washed out, the ICC released a statement reaffirming that reserve days for group-stage matches were not a realistic possibility.

Australia enter the match having thumped a severely undermanned Pakistan side 5-0 in the UAE in their most recent ODI series before the World Cup.

But Sarfaraz Ahmed's side have since regained seven first-choice players.

The Pakistan skipper suggested on match eve that both sides would likely want to bowl first on Wednesday given the conditions.