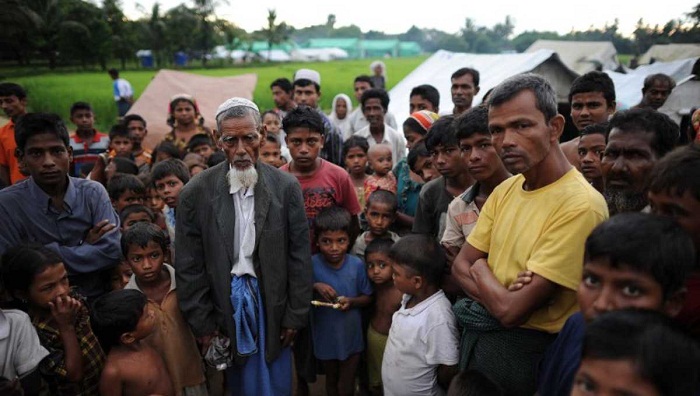 As they do not see any light of hope for their repatriation to their homeland in Rakhine state, Myanmar with dignity, a large number of Rohingyas are either making desperate move to go abroad illegally or spread to different parts of the country, putting their host Bangladesh in a fresh problem.

Local police and NGO officials said a human trafficking racket is encouraging the Rohingyas, mainly the women, to take the risk of going to Malaysia and Indonesia through the sea or flee camps to collect Bangladeshi passports with fake documents.

The racket is providing the Rohingyas with false documents for collecting passports and helping them escape their camps and contact their relatives living in different Muslim countries.

Even, some Rohingyas are receiving Bangladesh passports with the help of the human traffickers resorting to various tricks.

“We’re taking steps to incorporate the finger prints of Rohingyas in our system so that they can’t get Bangladeshi passports by any means. I hope, the process will be completed by July next,” he added.

Local police, BGB members and coastguards intensified their monitoring and launched special drives to prevent the Rohingyas from escaping their camps.

Law enforcers set up eight check posts at Ukhiya and Teknaf while coastguards took position at different points of the Naf River and the Bay of Bengal.

In their separate drives, BGB, Coast Guard and Police detained around 600 Rohingyas over the last one and half months foiling their bid to flee to Malaysia through the sea.

Besides, he said, the displaced Myanmar nationals are now taking help from local people to learn their language, dress-up style, and way of communication. “So, they now make efforts to escape their camps pretending to be local people.”

Masud also said most of the Rohingyas detained while fleeing their camps were women.

On June 6, police arrested 18 Rohingyas from Cox’s Bazar’s Link Road and produced them before a court.

On May 30, coastguards arrested 56 Rohingyas -- 26 women, 20 men and 10 children -- and two human traffickers from the deep sea while heading towards Malaysia.

On May 10, police arrested 23 Rohingyas from Khilkhet area in Dhaka as they were preparing to leave Bangladesh for Malaysia with Bangladeshi passports.

Two Rohingya women were detained at Hazrat Shahjalal International Airport while attempting to go to Saudi Arabia by a flight of Kuwait Airlines on May 25.

A day before, police detained 50 Rohingyas during a drive in Kazir Dewri area in Chattogram city and sent them back to their camps.

Besides, around 50 Rohingyas were detained from different parts of the country as they tried to collect passports with fake documents.

Nayeem said they are now very careful in issuing passports so that Rohingyas cannot get that with false documents.

Saikat Biswas, an official at Inter Sector Coordination Group (ISCG), said many Rohingyas are desperate to go abroad seeking a better life as there is no progress in their repatriation process.

Besides, he said, some Rohingyas are contacting their relatives who stay abroad and taking their help to flee Bangladesh through various ways.

Saikat feared Bangladesh may face a fresh problem if Rohingyas continue to flee their camps.

Abul Kalam, refugee relief and repatriation commissioner of Bangladesh, said it is a very tough job to control 12 lakh Rohingyas. “They’re making various efforts to either go to abroad or spread to different parts of the country. Many of them have already left their camps.”

He said they taking various steps to stop it by intensifying monitoring on the Rohingyas. “We’re strongly dealing with the issue and law enforcers are also playing an active role so that Rohingyas can’t flee their camps.”

Sheuly Sharma, Executive director of Jago Nari Unnoyon Sangsta who is working for the welfare of the women in the camps here, said many Rohingya girls now dream of getting married going to Malaysia. “Most Rohingya girls have a perception that they’ll have good husbands and a better life if they can go to Malaysia by any means as human traffickers gave them such an idea.”

Iqbal Hossain, Additional Police Superintendent of the district, said it is difficult to check the trafficking of Rohingya as they are willing to leave Bangladesh. “The situation has turned critical as the local human traffickers are assisting them.”

He said the government can erect barbed wire fences around the Rohingya camps to limit their movement.