Democracy was freed with release of Sheikh Hasina: Hasan Mahmud 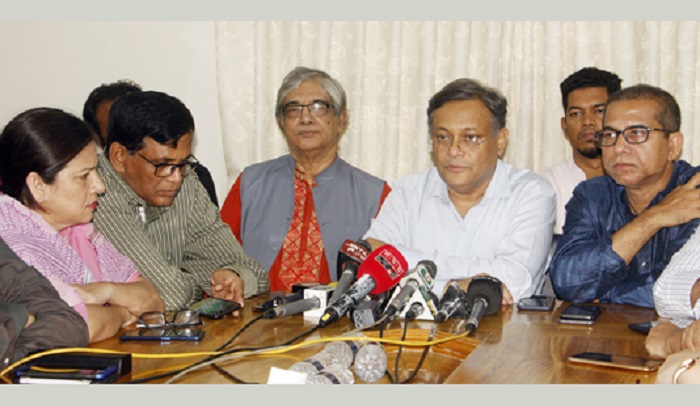 “June 7 is not only Sheikh Hasina’s release day but also the day of release of democracy,” he told in a press conference at AL president’s political office in the capital’s Dhanmondi area.

Hasan Mahmud, also the information minister, said on this day in 2008, Sheikh Hasina was released from the special sub-jail after remaining captive there for nearly 11 months.

The then military-backed government was forced to release the then AL President Sheikh Hasina by the AL leaders and activists, he said, adding Khaleda Zia was also freed for the continued protests of AL.

Hasan said the perpetrators of 1/11 are still active and they are dreaming to form an undemocratic government in the country. BNP is plotting to topple the government with the conspirators, he added.

He said BNP didn’t take part in the 2014 election as part of their conspiracies. They killed many people throwing petrol bombs. In 2018 polls, at first BNP declared that they would not take part in the election. But later they joined the polls. “Actually, they joined hands with the 1/11 conspirators.”

“Now, the country is moving ahead under the dynamic leadership of Prime Minister Sheikh Hasina. None can resist this development,” Hasan, also the spokesperson of AL, said.

Replying to a question, the minister said BNP is in an unstable condition and it was proved by Jatiyatabadi Chhatra Dal that put BNP’s central office at Nayapaltan under lock and key. There is no discipline in BNP, he added.

Later, a meeting of AL Publicity and Publication Sub-Committee was held with Hasan Mahmud in the chair discussing the programme for the founding anniversary of Awami League.