'I made bad decisions' Tamim opens up on pressure 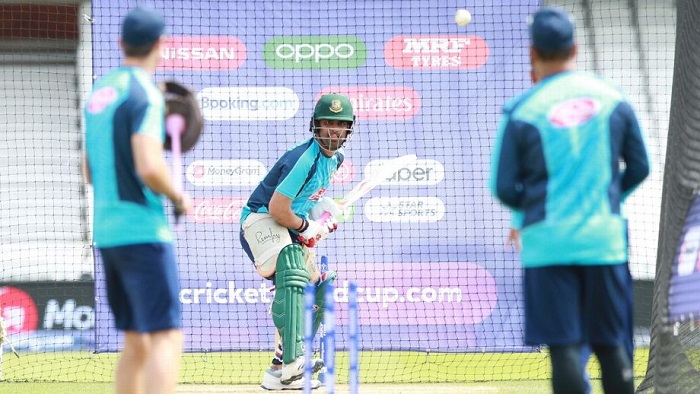 He has returned three low scores at the World Cup so far, and Tamim Iqbal puts it down to being weighed down by his own expectations.

He hasn't looked out of touch at any stage, lasting at least 40 minutes each time. After seeing off Jofra Archer's new-ball blast in Cardiff in Bangladesh's previous game against England, Tamim fell trying to charge Mark Wood. Against New Zealand in their second game, he top-edged an attempted flick-pull off Lockie Ferguson, looking like he was in two minds when playing the shot.

Tamim said that both shots were a result of poor decision-making, but stressed that those were the only mistakes he had made. "It has nothing to do with preparation, I made bad decisions," Tamim said in the lead-up to Bangladesh's next game, against Sri Lanka in Bristol on Tuesday. "I don't count the first match [South Africa] because it was a good delivery [from Andile Phehlukwayo]. The other two games, I made bad decisions on that particular ball. The other thing is, if you go through both my innings, I made one mistake and got out.

"As long as I batted, I did well, and then I am making one mistake and getting out. This is cricket, and you have to take it. I hope I take it in a positive way. I know the runs are around the corner. I am capable and I have done it before against the best attacks in the world, and I don't see why I can't do it again. And if I can't, that is also life."

The worrying part, however, is that his present mindset is very World Cup focused. He has had a great run of form over the past four years, but he hasn't always done well in the World Cup, most significantly in the last edition, where he scored 154 runs in six matches. Between the 2015 and 2019 World Cups, Tamim's average of 57.06 is second only to Rohit Sharma among openers. He has made seven centuries and 18 fifties in 51 innings in that period. Needless to say, his 2511 runs is also most among Bangladesh batsmen during this period.

"It is my expectations that is creating pressure," he said. "Whoever will read this on Cricinfo, they will never be able to understand what I mean. Only people close to me will know how I am feeling. I keep on going back to 2015 because I suffered, and so did my wife and family. It was a black chapter in my life.

"Again I am playing the World Cup. I don't want myself or my family members to face the same thing again. It is very easy to tell me that I have done well in the past. But I am not at all shy to say that I am worried that I don't go back to those days again. The beauty of the game, though, is, people forget everything after one or two good innings."

Tamim admitted that he was perhaps trying too hard to do well. "There's no 'enough' in cricket. I can easily point you towards my record in the last 50 matches. Nobody remembers it. It is always the present," he said. "But if I want to grow as a cricketer, I have to remember what I have done. I am trying hard, but I hope I don't try too hard, which probably I am. I hope if I score in one of the next couple of games, I will be up and running."

During the past week, Mashrafe Mortaza, Mushfiqur Rahim and Mohammad Mithun have been subjected to a lot of abuse and trolling by Bangladeshi fans on social media, something Tamim experienced first-hand during and after the 2015 World Cup.

"I am trying to stay away from social media, and knowing my family, they will never tell me. I hope it doesn't happen again," he said. "I just want to ask those who are writing all these things about us, whether they can take a few minutes to realise what these players have done for the country in the last 10-12 years. We are all fighting for Bangladesh, in whatever capacity we find ourselves in."