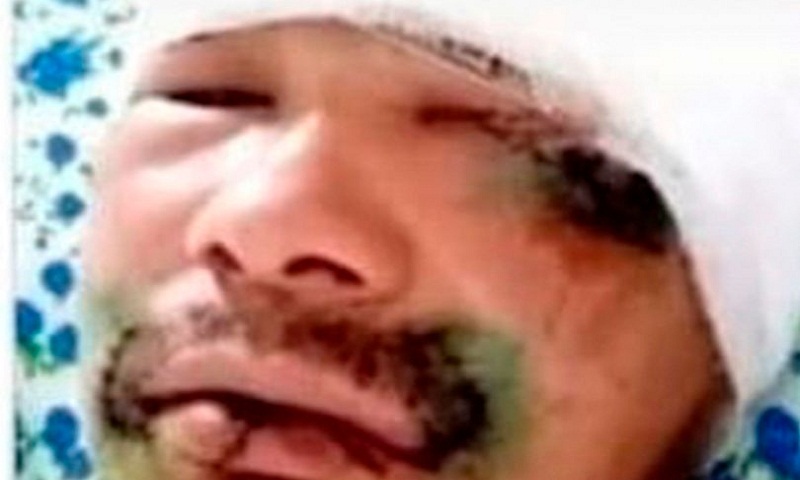 A man survived a brutal bear attack by biting off the predator's tongue, according to police.

Nikolay Irgit was collecting deer and elk antlers on a mountain with friends when the beast charged towards him.

But the 35-year-old punched the brown bear in the face and chomped off part off its tongue.

Police in Tuva, south Russia, say the man was lucky to survive the encounter.

But he has suffered gruesome wounds to his face, scalp, arms and chest.

His pals made a makeshift stretcher and carried the wounded Nikolay to the nearest village.

The police report said: “The bear knocked him down and started biting.

“At the moment when the bear clasped his teeth on Irgit's face, he managed to bite off a part of bear's tongue, which is why the bear stopped the attack and fled.

“After coming to his senses a bleeding Irgit called his friends to come and help.”

Nikolay is now in a large hospital more than 90 miles away in Kyzyl.

He said: "When I saw the bear, at first I froze in horror.

"I didn’t have any weapons, not even a knife.

“I began to scream, I thought it would not attack.

“But the bear charged towards me.

“I managed to punch him in the face, but he pounced and knocked me off my feet.”

The bear with the wounded tongue fled into the forest and has not been found.

Because the beast attacked a human, it is likely to be shot if the animal can be traced.

But Nikolay and his friends may be fined for illegally searching for antlers without a licence.

They were aiming to sell the castoff antlers on the black market, it is believed.

They are also suspected of starting a fire in a restricted forest zone.

It comes as a huge brown bear wandered into a busy airport in Petropavlovsk-Kamchatsky , in the east of Russia.

The bear made its way through the security checkpoint just as a packed flight to Moscow was readying to check in.

The wild animal was caught by a CCTV camera at a staff entrance, with one security guard jokingly saying: “Look who we have here at 5.30am. And without ID, too.”