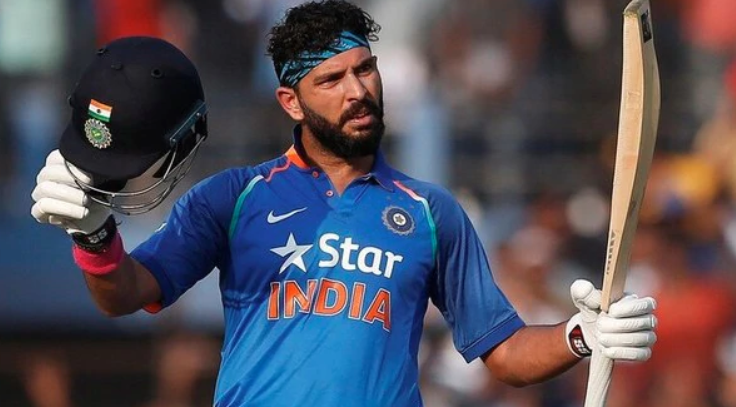 Former India allrounder Yuvraj Singh, who was the player of the tournament at the Cricket World Cup in 2011, has retired from the sport.

Yuvraj was diagnosed with cancer in 2012 and had nearly a year off cricket. He last played for India in a one-day international against the West Indies in 2017.

The highlight of his career was starring for India in its World Cup-winning campaign on home soil in 2011. The 37-year-old Yuvraj played 304 ODIs, 58 Twenty20 internationals and 40 test matches.

Cottrell twice got to use his trademark wicket celebration, the military-style salute, when he had Hashim Amla (6) caught by Chris Gayle and Aiden Markram (5) caught behind.

The covers came out when light rain started in the eighth over. Quinton de Kock was batting on 17 and South Africa skipper Faf du Plessis was yet to get off the mark.

Rain is forecast throughout Monday in Southampton, meaning Duckworth-Lewis run-rate equations are likely to come into play if the teams can get through a minimum number of overs.

West Indies captain Jason Holder won the toss and sent South Africa in to bat in the Cricket World Cup group game at Hampshire's Rose Bowl, with rain in the forecast and the Duckworth-Lewis run-rate equations likely to play a big factor in the outcome.

South Africa is coming off losses to England, Bangladesh and India and desperately needs a win to get its campaign going. The West Indies opened with a win over Pakistan and then had defending champion Australia in trouble before losing the second game by 15 runs.

The South Africans will need to score quickly before the heavy rain predicted during the afternoon, hoping the run-rate is high when the West Indies try to chase a total.

The South Africans made two changes to the XI that lost to India last week, with allrounder JP Duminy and wrist spinner Tabraiz Shamsi dropping in favor of paceman Beuran Hendricks and batsman Aiden Markram. Hendricks will be playing his first game since being drafted into the squad as injury cover.

The West Indies made two changes to the lineup that lost to Australia, with Darren Bravo recalled to open the innings at the expense of Evin Lewis and Kemar Roach included in the bowling attack.

Allrounder Andre Russell was ruled out of the lineup.

South Africa's Cricket World Cup campaign could be on the line against the West Indies after the Proteas opened the tournament with three straight defeats.

The South Africans have estimated a minimum six group wins will be required to reach the semifinals, and so after losses to England, Bangladesh and India, each game now is a must-win for them.

With rain on the forecast Monday for Southampton, the weather could be a factor in the outcome.

And so could the West Indies' bowling group, which is starting to draw comparisons with the great Windies pace attacks of the 1970s and 80s. The West Indies bounced out Pakistan for 105 in its opening game and then had five-time champion Australia in trouble at 38-4 before losing its second game.

There's already been one washout in the first 11 days of the tournament, with Pakistan and Sri Lanka having to share points in Bristol on Friday.