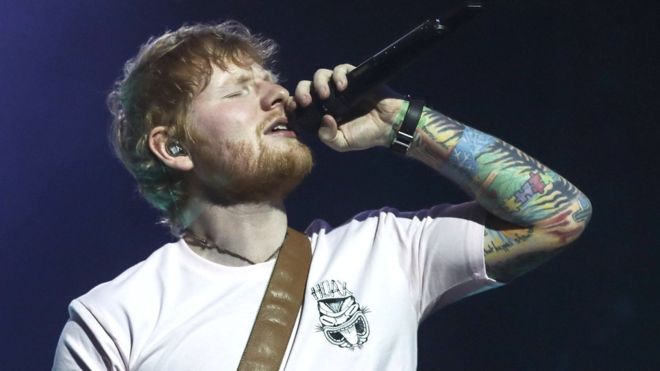 Ed Sheeran was the most-played artist in the UK last year, while Feel It Still by Portugal The Man was 2018's most-played song.

Sheeran topped the chart despite not releasing new music; and without an entry in the Top 10 most-played tracks, suggesting his entire catalogue of hits remains on rotation on the radio.

It's the third time in four years that he's been the UK's most-played artist.

The data was compiled by music royalty body PPL, which monitors the music played on TV and radio; and in pubs and clubs.

It illustrates how some songs achieve a long after-life on radio, months after they stop jostling for position in the official Top 40.

Portugal The Man's feel-good hit Feel It Still was originally released in 2017; but still garnered enough plays to become the biggest radio hit of the year.

Meanwhile Pink's What About Us made the top 10 for a second year in a row - a feat that has only ever been achieved once before, by Maroon 5's Moves Like Jagger in 2011 and 2012.

George Ezra made his first appearance in the chart, with the singles Paradise and Shotgun both making an appearance.

And pop star Jess Glynne maintained her run of airplay hits, with These Days named the year's second most-played song.

The star, who's currently supporting the Spice Girls on tour, has appeared in the top 10 most-played tracks in four of the last five years.

Her success has also contributed to a new milestone for the charts: 2018 was the first time that the majority of most-played acts were, or featured, women.

The PPL said nine of the top 10 most-played artists were British, with Pink being the exception.

The charts were revealed ahead of at its AGM, where the society is due to announce that it collected £246.8 million on behalf of 105,192 performers and rights holders over the last year.