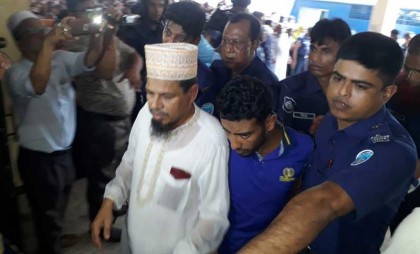 A court in Feni has taken cognisance of the charges against 16 accused over the murder of madrasah student Nusrat Jahan Rafi.

Denying the bail of 6 accused, the court ordered to send them to the jail and also fixed June 20 to frame the charges.

The court, however, acquitted five in the case as the Police Bureau of Investigation (PBI) didn’t mention their names in the charge sheet.

Earlier on May 28, PBI submitted charge sheet against 16 accused over the killing of Nusrat before the court of Senior Judicial Magistrate Zakir Hossain.

The case was shifted to the Women and Children Repression Prevention Tribunal  on May 30.

Nusrat had accused Feni’s Sonagazi Islamia Senior Fazil Madrasah principal Siraj Ud Doula of harassing her sexually on March 27 while she was exposed to his extreme vengeance on April 6 when she went to the madrasah to appear in the HSC equivalent “Alim” examination.

A group of masked youths, reported to be principal’s stooge, took Nusrat to the rooftop and set her on fire in their bid to kill her.

Nusrat succumbed to her injuries at Dhaka Medical College and Hospital (DMCH) in the capital on April 10.