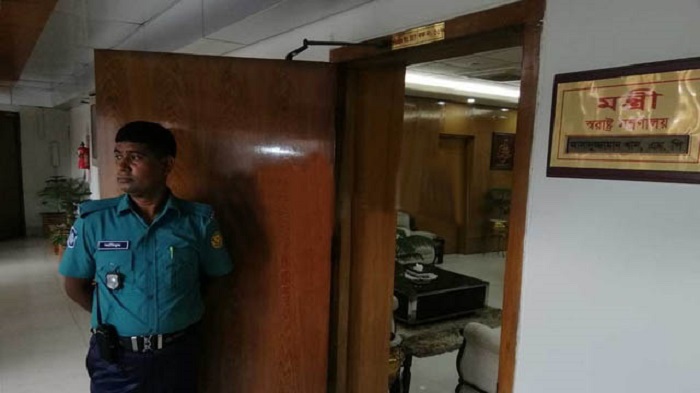 Home Minister Assaduzzaman Khan Kamal on Sunday failed to enter his office due to a dead mouse.

His room of the secretariat was closed for five days as the government service holders spent Eid vacation from June 4 to 8 on the occasion of Eid-ul-Fitr.

After five days of vacation the government offices, including the secretariat, have started functioning on Sunday.

Home Minister also joined his office but failed to enter his room as there was decay of a dead mouse, spreading stench in the surrounding environment.

Usually, every year, Home Minister exchanges post-Eid greetings with secretariat’s officials and journalists in his office room in the very first working day after Eid holidays.

But a dead mouse debarred home minister from entering his room this year and forced him to greet with the officials and journalists in another small room adjacent to his room.

Aminul Islam, a duty police, assigned to guard outside the room of Home Minister, said they noticed the decay of a dead mouse after they opened the room. There spread a very bad smell in the room from the decay. So, Home Minister failed to enter his room.

He said, “Perhaps, the mouse died a few days ago. We removed the decay of the mouse. But the stench has not disappeared till the noon. As the windows of the room are permanently locked, we have kept the only door open for the free movement of air.”

Aminul also said there is some disturbance of mice in the room of the minister. We have set traps to catch those mice. The mouse might have been killed falling victim to one of those traps.