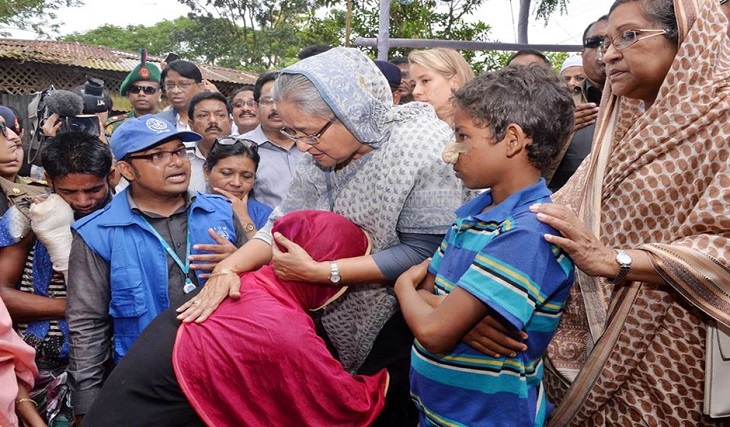 The 12-day foreign trip of the Prime Minister Sheikh Hasina is widely expected to usher in a new horizon towards Bangladesh’s sustained diplomatic efforts for a just solution of the Rohingya crisis. This visit bears a great significance since the Prime Minister of Bangladesh herself has taken the initiative to carry forward the process started at the very beginning of the Rohingya influx. Speaking factually, diplomatic efforts to find out a rational and acceptable formula have been virtually stalemated to a great extent precisely because of Myanmar government dilly-dallying tactics and elusive mindset. In a pre-visit press briefing foreign minister MA Abdul Momen has made it clear that the visit apart from trade and business promotion aims at galvanising development partners’ favourable opinion for the Rohingya cause.

The crisis actually began in August 2017 when thousands of terrified Rohingya Muslims fled their homes in Arakan Province in the face of Myanmar Army’s heinous massacres, sexual violence and arson.  Their plight went to the extreme when local Buddhists and other ethnic groups joined hands with the Myanmar army. These utterly helpless Rohingyas took shelter in the beaches and paddy fields bordering southern Bangladesh. To protect these helpless people from being the victims of a bigger genocide, Bangladesh government under Sheikh Hasina allowed them inside Bangladesh just for humanitarian grounds. As per a human watch report of April, 2019, 910,000 Rohingya refugees live in Bangladesh. What a terrible figure!

Prime Minister Sheikh Hasina time and again reiterated that Bangladesh can hardly afford to shelter such a overwhelming figure for a longer stretch of time. The Prime Minister is true in every sense of the words she uttered. First, it is not practically possible for Bangladesh to keep this exodus mainly because of our resource constraints. Second, the procreation rate of the Rohingyas is far too high compared to any community or ethnic group. Moreover, due to high illiteracy rate they are very vulnerable to crimes and anti-social activities. Last but not the least, Rohingya settlements are putting an extra pressure on the typical landscape of Cox’s Bazar harbouring the longest sea-beach of the world. In fact, healthy liveable environment around the settlement are being increasingly threatened.

Although Rohingya issue was raised even in the UN Security Council session, it was vetoed out owing to the strong opposition of China and Russia, the active business partners of Myanmar, and Myanmar thus survived sanctions. However, Bangladesh has been relentlessly making diplomatic endeavours to strike a deal with Myanmar on the question of Rohingya repatriation in the shortest possible time. In line with its avowed goal, Bangladesh has achieved outstanding successes in involving global pressure groups and humanitarian organisations like UNHCR, Amnesty International, the EU, Human Watch, etc. to pressurise Myanmar for coming to the negotiating table. The typical audacity and diplomatic dishonesty of Myanmar have, unfortunately, thwarted all these missions and moves of Bangladesh for peacefully settling the issue of repatriation.

Until now, four rounds of bilateral talks have been held between Bangladesh and Myanmar. These talks have virtually ended in a visible fiasco. Every time Myanmar authority slips away from the negotiating table conditioning the talks by some silly excuses. The most notorious weapon used by Myanmar authority while parleying with their Bangladeshi counterpart is their so-called citizenship theory of 1982 and their even more flimsy rhetoric of scrutinising screen test. Being the worst grabber of human rights in its own country over the decades, Myanmar never ever accepted the historical fact that migration is just the normal processes of civilisation and culture. It is by now clear that the most controversial Citizenship Law of 1982 which can only be compared to the Nazi Law was made with the specific aim of ethnic cleansing especially the Arakan Muslims.

Like the Palestinians, Rohingyas are the stateless nation of the recent times. Even the confirmed cynic will agree on the point that by giving shelter and humanitarian aids to the most hapless Rohingyas, Bangladesh has done the noblest ever job in upholding humanity just for humanity’s sake completely trashing any other material consideration. I believe none will deny this exclusive credit to Sheikh Hasina and the government led by her. Thus being the champion of humanity, she became firmly committed to the cause and concerns of the Rohingyas.

The Prime Minister is now actually on her most challenging mission to make a real and visible breakthrough in the stalemated process of repatriation. Though her present tri-nation tour will not exclusively address the Rohingya issue, she will as a part of her one-to-one diplomacy will surely share her version regarding the Rohingya problem and apprise the world leaders of Bangladesh’s clear and unequivocal stand on the issue. The whole process of direct talks will give her a unique opportunity to involve the world leaders in the process initiated by Bangladesh in shooting out the Rohingya problem.

The 14th session of the OIC being held in Mekkah will also offer the PM quite a larger space to voice her utmost concerns for the earliest repatriation of the Rohingyas. The summit captioned “Together for Future” clearly suggests that Muslim leaders will work cohesively to settle the most difficult problems in the Muslim world. Decades-old Palestinian problem still remains unsolved and the recent plight of the Rohingya Muslims is getting from worse to worst with the passing of each single day. It is widely expected that Prime Minister will explore the fullest potentials out of the largest forum for the Muslims in addressing effectively the problems of the Rohingyas.

The writer is an Assistant Professor of English, Bogura Cantonment Public School & College. He can be reached at :[email protected]