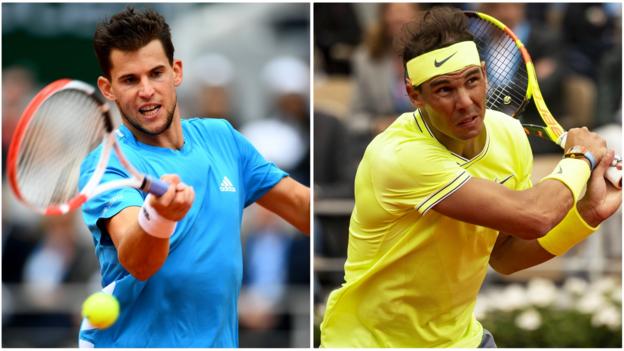 Rafael Nadal admits the prospect of winning a 12th Roland Garros title and 18th major on Sunday would have once just seemed like an "incredible" dream in a career so often at the mercy of a succession of morale-sapping injuries.

However, he knows he cannot under-estimate Austria's Dominic Thiem when they meet again in the Roland Garros final.

Thiem has four wins on clay over the 33-year-old Spaniard -- only Novak Djokovic has more.

The 25-year-old arrives in the final having shocked world number one Djokovic in a five-set semi-final on Saturday, ending the Serb's 26-match winning run at the Slams.

"Yes, it's incredible to be here again to be honest," said Nadal, who has never lost a Roland Garros final and boasts a 92-2 record at the tournament since his 2005 debut.

"It is very special and difficult to explain, but here we are. And the day that we start thinking about if it's incredible or not probably will be the day to do another thing."

Nadal has hardly broken sweat at the French Open this year, making the final for the loss of just one set, against David Goffin in the third round.

Against Roger Federer in the semi-finals, he conceded just five games, handing the Swiss his worst Slam loss in 11 years.

"There is nobody who even plays remotely close to Rafa," admitted Federer.

"I don't even know who I need to go search for to go practice with somebody who plays like him."

Victory on Sunday will move Nadal on to 18 majors, just two behind Federer on the all-time list.

He is also the best part of five years younger than his old rival.

"This is something I never dreamed about five, six, eight years ago, but it's happening today," said Nadal who has been written off numerous times in his career.

His battles with knee and wrist problems have seen him miss eight Grand Slam tournaments.

A wrist injury forced a withdrawal from Roland Garros after two rounds in 2016 which in turn forced him to sit out Wimbledon.

"My goal is to keep going," a defiant Nadal added.

The world number two allowed Thiem just nine games when they met in the 2018 final in Paris.

However, the Austrian won their most recent meeting on clay in the semi-finals in Barcelona in April in straight sets.

Nadal also needed five sets to see off Thiem in the quarter-finals at the US Open last year.

Despite having to play four days in succession, Thiem said he was happy to come back out again on Sunday.

His coach Nicolas Massu, however, had said he asked the tournament referee if the final could be shifted back 24 hours.

"I think it's fine. I mean, it's not the first time that that happens in tennis, and it's not going to be the last time. That's our sport," said Thiem whose semi-final with Djokovic spanned a full 24 hours.

"I played a really good match against him in Barcelona. It was six weeks ago. So of course I try to do similar even though it's way tougher to play him here," he said.

Despite playing over four hours over two days to defeat Djokovic for just the third time in 10 meetings, Thiem has only spent two more hours on court than Nadal getting to the final.

"I'm feeling fine. I'm full of adrenaline still from today's match, and also I will have that tomorrow," he added.

"So I'm not going to be tired. It's all going to come after the tournament. So I'm ready to leave all or everything what I have out on the court tomorrow."

With Nadal the overwhelming favourite, Thiem refuses to put too much pressure on his shoulders.

Some of the statistics back up his conservative approach.

On break points converted, the Spaniard has a 37/70 conversion rate (53 per cent) with Thiem making 34 of 71 (48 per cent), less than half his opportunities.

"It's big dream for me to win on Sunday. But I also have in my head that if it's not happening tomorrow, which can happen easy because of the opponent who is on the other side of the net, so I think I don't make myself too much pressure."