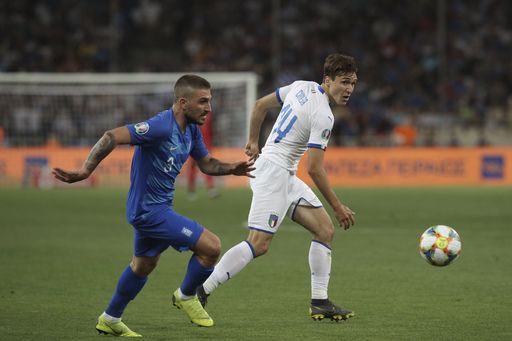 Italy's new attack-minded approach continues to pay off as the Azzurri beat Greece 3-0 on Saturday to move three points clear at the top of their 2020 European Championship qualifying group.

Nicolo Barella, Lorenzo Insigne and Leonardo Bonucci scored in an entertaining first half in Athens.

Italy tops Group J with nine points from three matches. It is three points clear of Finland, which moved into second place with a 2-0 win over Bosnia-Herzegovina.

Greece and Bosnia-Herzegovina have four points.

"No, it wasn't our best performance but we were good at controlling the match from the first minute," Italy coach Roberto Mancini said. "But we should have pushed more, we sat back too much ... in the second half we should have scored more goals. That needs to be improved."

Italy was entirely dominant and had the win all but wrapped up in less than 33 minutes.

It broke the deadlock in the 23rd minute when Andrea Belotti surged into the area and cut the ball back for Barella to blast into the back of the net.

Insigne doubled Italy's lead on the half hour with an impudent finish as he cut inside from the left and curled a shot into the far top corner.

And Italy made it three in the space of 10 minutes when Bonucci headed Emerson Palmieri's cross in off the base of the right post.

The visitors could have added more late in the second half, had it not been for two excellent saves by Greece goalkeeper Vassilis Barkas.

Italy has now scored 11 goals and conceded none in their opening three qualifying matches.

Italy's attacking style is a sign of how far the Azzurri have come under Mancini since he took charge following the disappointment of failing to qualify for the 2018 World Cup.

"We are a bit ahead in respect to our initial plans but there is still a lot of work to be done," Mancini said. "But the attitude is the right one. Everything has gone well up to now."