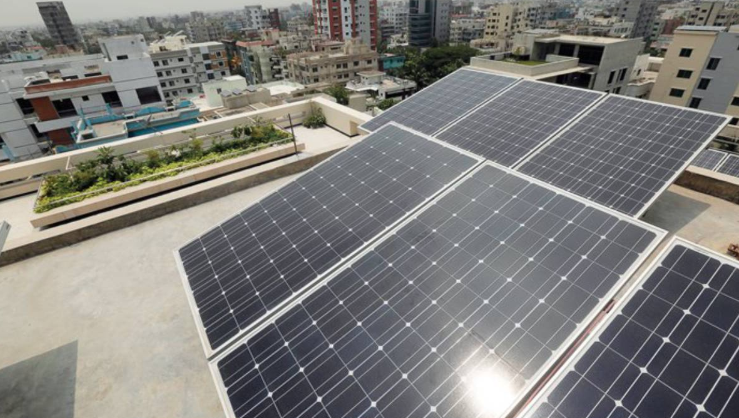 The sale of solar power from consumers’ end to the national grid under the Net Metering System (NMS) is growing fast as its volume has already reached 8.213 MW across the country.

According to official statistics, now all the six government distribution utilities are purchasing solar power from 359 consumers in May which was 179 in February last.

The sale, which started in the last quarter of 2018, reached 4.243 in February and now it stood at 8.213 MW in May, Power Division statistics reveal.

On July 28, in 2018, the Power Division unveiled the Net Metering Guideline to buy rooftop solar power from consumers.

Under the system, any consumer can set up a rooftop solar panel system, covering up to 70 percent capacity of the sanctioned load and sell the additional or unconsumed solar power through a special metre under an exchange arrangement.

On working days, they can preserve their solar power at the grid, and sell it to their power supply company, or take it back for consumption.

At the end of the month, bills are adjusted based on consumption and sale of solar power to the utilities. Consumers are paid by the distribution company at a bulk rate if the sale exceeds the consumption.

The statistics show that the REB is leading the chart by buying 6.260 MW of unconsumed solar electricity from its 65 consumers across the country.

The REB is followed by DPDC with its purchase of 862.5 kilowatt of solar power from 94 consumers while Nesco holds the third position with its buy of 368 kilowatt from a single consumer.

Official sources said a meeting, held on May 19 at the Power Division with power secretary Dr Ahmad Kaikaus in the chair, reviewed the progress of the unconsumed solar power purchase from consumers under NMS.

The committee instructed the utilities to move motivate the industrial consumers to set up rooftop solar power plants on their industries and take its benefit by selling their unconsumed power to the national grid.