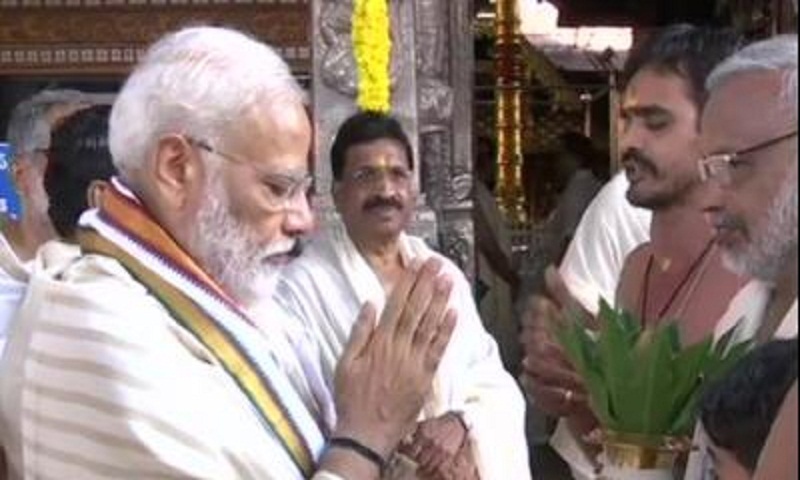 Prime Minister Narendra Modi offered prayers at Sree Krishna Temple in Guruvayur in Thrissur Saturday morning. He is on a visit to Kerala for the first time after getting re-elected as Prime Minister. He landed at the Naval air base in Kochi late Friday night, around 11 pm, and proceeded to the Ernakulam Guest House for the night. This morning, he took a chopper to reach the temple.

After offering prayers at the temple, PM Modi tweeted: “The Guruvayur Temple is divine and magnificent. Prayed at this iconic Temple for the progress and prosperity of India.”

Security was tightened at the temple ahead of his visit. The centuries-old temple, located in Thrissur district, is one of the important places of Hindu worship in the state.

The Prime Minister also performed a ‘thulabharam’ (a ritual with weighing scales) using lotus flowers. He has visited the temple in the past during his stint as the chief minister of Gujarat. This is his first visit to a religious place since becoming the PM for a second term.

PM Modi, after visiting the temple, addressed a public meeting at Guruvayoor where he said, “I have got a chance to come to this land of Guruvayur once again. This is a source of inspiration. I applaud the supporters and people of Kerala for their active participation in the festival of democracy to strengthen the democratic fabric of our nation. Elections have an important role in our democracy but after elections it becomes more important to have a sense of responsibility towards the 130 crore citizens. Those who made us win our ours, those who did not make us win are also ours. Kerala is as much mine as is Varanasi.”

Following the BJP programme in Guruvayur, Modi will fly back to Kochi Saturday afternoon from where he will take off for the Maldives for the first bilateral trip of his second term, The Indian Express.