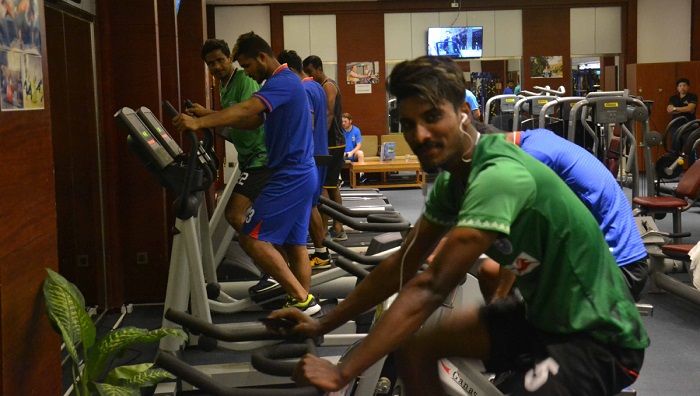 They also had swimming and recovery sessions at Landmark Hotel after training.

The team will leave Laos for Thailand at 8:30pm on Friday and then fly to Dhaka at 11:15pm. They are expected to reach Dhaka on Saturday at 12:50am.

Bangladesh defeated Laos by 1-0 goal on Thursday in their away match for the joint pre-qualifications for FIFA World Cup 2022 and AFC Asian Cup 2023 at the National Stadium in Vientiane.

The men in red and green will now play their home match against the same opponent on June 11 at Bangabandhu National Stadium in Dhaka at 7pm.

Earlier, a 31-member Bangladesh team reached Bangkok on May 24 to prepare for their home and away basis joint qualifications for FIFA World Cup 2022 and AFC Asian Cup 2023 against Laos.

They played to a 1-1 draw with Air Force United FC in their first match on May 28 at the Air Force playground in Bangkok. Biplu Ahmed netted the lone goal for Bangladesh.